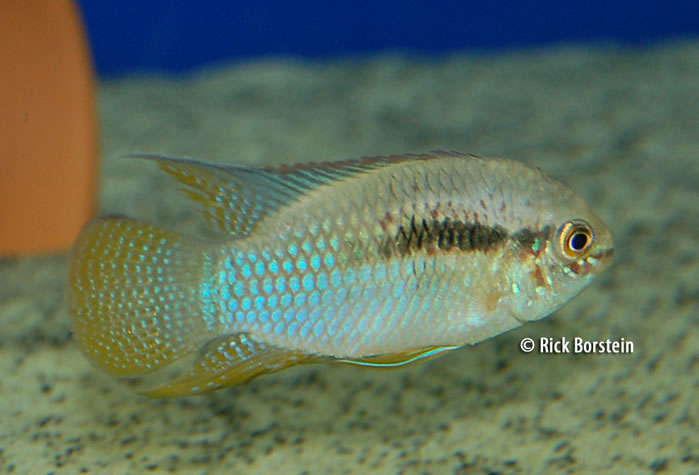 Above Laetacara curviceps. Photo of male in breeding color by Rick Borstein. 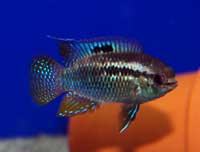 Laetacara curviceps was first typed by Ahl way back in 1923. This peaceful, substrate-spawning dwarf cichlid sometimes sold as Aequidens curviceps or Acara curviceps. The latin root of the genus Laetecara is laetus, meaning happy. This group of fishes are known as the smiling acara due to the dark, curved band on the face which makes the fish look happy.

The common name, Flag Acara, is a bit of a mystery to me. The color pattern doesn't look very "flag-like" to me.

Some sources indicate that this fish has a wide range of color variants. I've kept a few different specimens over the years and they all looked pretty much the same to me.

Depending on the mood of the fish— or if it is in breeding coloration— the color can vary a lot.

Males are generally tan with dark markings and yellow-organge highlights in the fins. Sometimes, the fish has a pearly appearance. Females have similar patterns, but are not as brightly colored.

Laetacara curviceps is found in the lower tributaries of the Amazon River in Brazil. Some sources indicate it can be found in shallow ponds and puddles.

Laetacara curviceps is easy to keep. Provide regular partial water changes. They will do fine in Chicago hard water, but to breed or raise the babies, soft acid water is very helpful.

I had kept, but had not successfully bred, Laetacara curviceps a few years prior. I was always able to get them to spawn, but had trouble raising the babies. The eggs wouldn't hatch or would fungus immediately. At this point in my "cichlid career", I was still a beginner.

GCCA member Eric Rogne gave me six juvenlies. I placed them in a 10 gallon tank to grow out and promptly forgot about them. They were crowded, but grew, but from my infrequent looks into the tank I could tell they weren't very happy.

I was setting up a 110 gallon tank and needed some break-in fish, so in went the Laetacara curviceps. Two days later, a pair had staked out a terracotta pot and spawned on top. The profound color change was a sure indication.

Strangely, the larger male fish "sat" on the eggs while the female patrolled the outskirts of the territory.

Unfortunately, the parents ate the eggs the next day.

Over the years, I have had better success spawning dwarf South American cichlids in soft water conditions.

Two weeks later, I did a 50% water change with 100% reverse osmosis (soft) water. I also added ten teaspoons of Kent pH Down to acidify the water. The very next day the pair of Laetacara curviceps spawned again. I counted about one hundred very tiny eggs and removed them to artificially hatch them.

After three days, the eggs fell off the terracotta pot and wriggled on the bottom of the hatching tank. After a total of seven days, the very tiny fry were free-swimming. I fed Hikari First Bite powder and freshly hatched micro-sized baby brine shrimp.

The fry were doing well, but at about a week after the fry were free-swimming, I had a massive die-off. The mortality was likely due to water quality issues and overfeeding. It is possible to feed too much baby brine shrimp and "pop" the babies.

I was able to eventually save eight fry— enough for a BAP! The fry grow slowly, unfortunately. At five weeks, they are only about three-eights of an inch long.

Yesterday, the Laetacara curviceps spawned again, but ate their eggs. From my experience, they are not very good parents. They might do better in a densely landscaped tank.