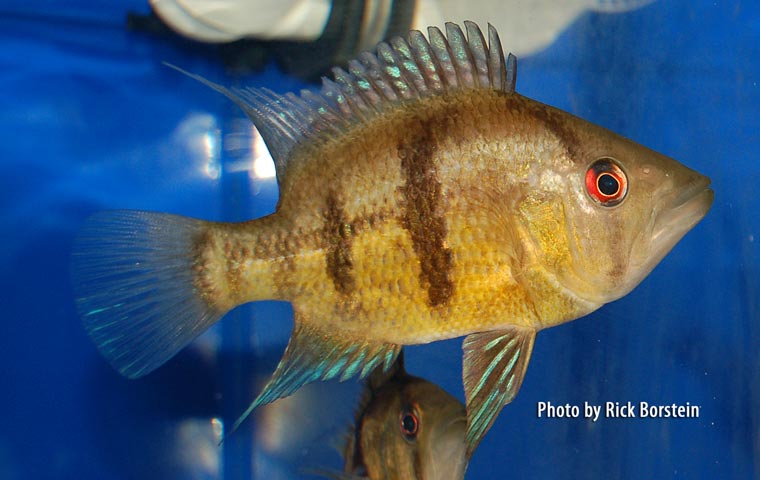 Caquetaia myersi a beautiful and large predatory cichlid from Columbia first typed by Schultz in 1944.  Caquetaia myersi has a protrusible mouth which means the mouth can extend quickly to create a vacuum allowing it to "inhale" prey fish.

The derivation of the genus comes from the name of the Rio Caqueta River, which flows into the Amazon. The species name myersi is a dedication to Dr. George Sprague Myers, an icthyologist at Stanford University.

According to an article in the ACA's Buntbarshe Bulletin" No. 181,Caquetaia myersi was found in the Rio Quebrada Mochilero, Rio Quebrada Aguas Calientes, Rio Quebrada Montanita and Rio Quebrada la Granada in Columbia. Water temperatures and makeup was highly variable (73-86F and 6.0 to 8.5 pH). The fish are usually associated with the vegetation at the sides of the river.

The collecting location is not considered safe due to guerilla activity, so I do not suspect we will see more wild stock any time soon.

These large, robust fish require a big tank. Juveniles and smaller individuals up to about six inches may be housed in a 75G tank, but I would suggest a 6-foot tank for adults. Caquetaia myersi is a big eater and generates a considerable amount of waste, so regular partial water changes and tank maintenance are required. I kept my fish in regular Chicago water (7.4 pH and very hard) at 78F and they did fine.

Caquetaia spectabilisis are ambush predators and are not above snacking on smaller companions. To be safe, do not keep Caquetaia myersi with any fish less than half its length. Fish of approximately the same size are an even better choice. 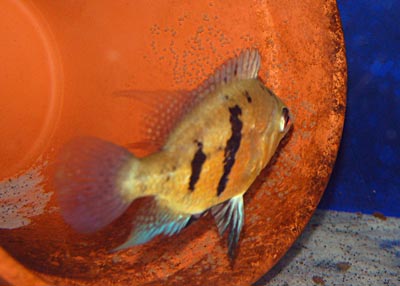 Caquetaia myersi isn't the easiest fish to breed for several reasons. Firstly, the fish need to be at least 6-7 inches long to be sexually mature which is probably about eighteen months old. Secondly, males often outpace their female tankmates in growth which means the female could become a snack just as easily!. Thirdly, I think this fish is a seasonal breeder. Lastly, although they mostly ignore fish they can't eat, large males will go out of their way to bully sub-dominant males, especially if they are interested in reproducing.

I obtained four, juvenile Caquetaia myersi from fellow GCCA member Scott Moreen at one of GCCA's swap meets. At the time, the fish were 3 to 4.5 inches long. I placed them in a 75G tank for growout. Returning home one day from work, I discovered that the smallest fish was torn up and I could see teeth marks amidships on the little fish's flank. Yep, the big guy had tried to eat him. I removed this fish to a ten-gallon tank where I power fed him to put on some size.

The fish grew over the ensuing months and I moved the group (including their nearly swallowed comrade) to a 110G tank housing a group of eight Asthatheros nourissati and two large Archocentrus centrarchus which were too big to be eaten by the Caquetaia myersi.

The fish continued to grow over a few months until the male was about ten inches long. At this point, I surmised that I had two pairs. A large male/female and a smaller pair. The largest male began to seriously abuse the smaller male who exhibited various rips in his fins and wounds on the flanks. Just before a large thunderstorm hit the Chicago area, the pair bred in a 10-inch terracotta flower pot. When breeding it is quite easy to tell the fish apart as the male had a very long and pointed genital papilliae while the female's was shorter and much rounder.

About three hundred large eggs were laid and the female initially provided good protection for them. Given the large number of fish in the tank, I was worried that the fish would not protect this first spawn, so I pulled the flowerpot and placed it in a bare 10-gallon tank to artificially hatch the babies. I used Methylene Blue as an anti-fungal and after six days the fry hatched. Two days later the fry were free-swimming and able to eat freshly hatched baby brine shrimp and microworms.

The fry grow quickly, but have a tendency to overeat which can lead to attrition. Transition the fish off of baby brine shrimp as soon as you are able.

I doubt you would find this fish at any shop that does not specialize in cichlids. If you did find them, I would expect two-inch fish to go for about $10-15 each. Adult fish would be valued at $30-45 each.