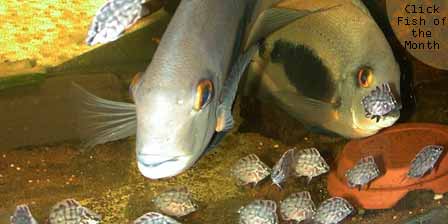 Uaru amphiacanthoides, whose common name is the Uaru, is one of the medium to large New World Cichlids. There are actually two species of Uaru, Uaru amphiacanthoides and the Uaru imperialis, both rarely exported. This article will concentrate on the former and the more common. Although the Uaru can attain sizes up to 12 inches or so, it is rare to see one over 10 inches. The coloration of the adult Uaru is rather bland. They are greenish brown with a little black along their sides. But when spawning time comes along they color up magnificently. The whole sides of their bodies turn black leaving just a little brown around the edges and their eyes brighten to a coppery red color as if someone turned on a light inside their heads. Their young are a beautifully mottled version of their parents but lose this coloration around the 3-4 inch size.

They are a very abundant fish along the Amazon River basin and have long been a favorite of native cichlid lovers er, eaters as a source of food. Because of this, they aren’t exported as readily as other South American Cichlids.

Their natural environment is the soft acid waters of the Amazon river, but they tolerate just about any ph well. I know people who have spawned them successfully in ph’s ranging from 5.5 to 7.4. They do however like a warmer water temperature range of 75 degrees to 85 degrees with 81-84 degrees optimum.

The Uaru will eat just about anything. They will eat flake foods, pellets, worms, or any type of vegetable matter that you have around. They love aquarium plants and will eat them down to the roots. Baby Uarus, when newly hatched, will eat the slime from their parents sides. After about two weeks they will eat a finely granulated flake or newly hatched brine shrimp or anything else they can it into their mouths. They are incredibly fast growers. The fry pictured with their parents are four weeks old. The parents are about 8 inches to compare size.

Note You can pull the eggs before hatching without fear of losing the fry. The young don’t seem to be as dependent on their parents slime as the Discus.

Uarus have always had the rap as being extremely difficult to breed. They certainly aren’t like convicts but most aquarists can accomplish the mission at hand. You know what they say about patience being a virtue. The best way to sex them is to let them pair off on their own. Keep about six or eight in a large tank and they will do the rest. Remove the other fish and you have a pair. Uarus’ are substrate spawners and will lay from 100 to 800 eggs at a time, maybe more. They will spawn on the floor of a tank, on a piece of slate or in a large flowerpot. They, like most South American cichlids, will tend to their young if in a separate tank from other fish. If you keep the fry in too long, they will disappear. If they spawn in a community tank, you will have a hard time separating the fry from the parents. If they spawn in a community tank, siphon the wrigglers out using airline tubing.

Fry $5 to $20. Adults $20 to $100. The Uaru isn’t the most common cichlid in town. You might have to ask your local store if they know a breeder and can special order them for you. If not, keep looking! When you least expect it, you’ll find it.