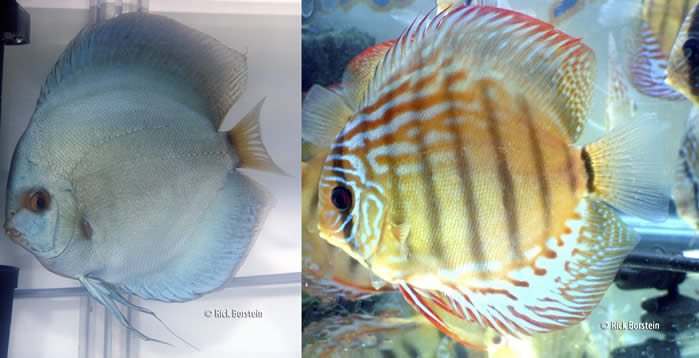 Sometimes called the "King of the Aquarium", the Discus is one of the most beautiful of all tropical fishes. Discus have been in the aquarium hobby for over 75 years and its popularity shows. The discus has more color variations and hybrids of any fish I know. Search the internet and be amazed at the endless variations of this fish.

Symphysodon heckeli is known by the common name Heckel Discus while Symphysodon aequifasciatus is a little more complicated.

Through hybridization and the endless search for the perfect Discus, both these species and sub-species have been crossed once, crossed twice and crossed again. Although Discus are as popular as ever, there is a remarkable resurgence in attaining "Wild" Discus.

The discus is found throughout the Amazon River and many of the river's tributaries. Their natural habitat provides them with acidic, warm water. A ph around 6.5 is perfect and the water temperature should be a little on the warm side, about 84 degrees. Discus can handle water temperatures into the 90's. Some recommend that the temperature, when acclimating "Wild" Discus, be in the 90's to increase metabolism and the rid the fish of parasites. Of course, medication goes hand in hand with achieving that goal.

This is where it gets a little tricky. Some people avoid Discus, at all costs, because they are hard to keep and harder to breed. It's all a matter of perspective. I'm not saying that they are easy fish, and I wouldn't recommend them for beginners, but any knowledgeable aquarist should have no problems keeping these fish.

Although they can be mixed with other fish, I personally have had better luck raising them by themselves. Discus are susceptible to internal problems and parasites, especially intestinal flagellates, or Hexamita. Discus should have a 25-30% water change weekly.

As with all fish, you should feed a variety of foods. Beef heart is considered the best food for Discus. Unfortunately, straight beef heart does a great job of fouling water. It is best to feed them a good flake food, rinsed frozen brine shrimp, frozen blood worms, or farm raised/home raised red worms. They are not to be fed tubifex worms, black worms, daphnia or other freshwater live foods because of the uncertainty of introducing intestinal parasites. Feed the beef heart before doing your water change.

Some people think discus are hard to breed. This is not true. Good healthy discus will breed rather easily. The best method is the raise several discus in a large tank and let them pair off naturally. One word of caution, Discus will sometimes pair off into pairs consisting of 2 females. They will spawn on plants, the side of the tank or just about anything. Most breeders use a piece of slate about 3 inches wide and 12 inches long and lean it on the glass at about a 65 degree angle. You will see the perspective pair clean that slate incessantly for hours, sometimes days, before they spawn. Watch them spawn and make sure both fish aren't laying eggs. If it is 2 females remove one and hope another pair develops. Discus will pair for life so once they pair off and breed successfully, they should be moved to an adequately sized breeding tank. I always liked the deeper tanks for Discus like a 29 gallon tank. If you are sure that the pair consists of a male and a female, don't be discouraged by infertile eggs. Sometimes the male doesn't get with the program at first and needs a couple of runs before he fertilizes the eggs. Discus fry are to be left with the parent because they feed off the slime on their parents' body. They should be removed once the parents' start looking distressed from the constant barrage of fry feeding off them. Some breeders remove the eggs and incubate separately from the parents. Other argue that the fry need the parental slime to grow properly.

At retail, fry are usually around $20. Young adults will probably fetch closer to $50. Breeding pairs can fetch $300-$400. The biggest factor regarding price is the color variety you are interested in purchasing. Some are moderately priced, some newer strains rather expensive. If it's your first time out, start with the cheapest, healthiest fish you can, before spending the big bucks on some extreme color variety.

Discus, of all shapes and colors, are readily available. Sometimes local stores don't carry them because of expense and bad luck with keeping them in a store environment. Discus at retail is a liability, at best. I am not saying not to buy your fish at the local aquarium, just be fussy.

Never buy a Discus that is dark in color or has sunken eyes. Ask if you can watch them eat before you purchase. If any fish have long stringy feces, avoid the whole tank (could be internal parasites). There are local breeders at any aquarium society, breeders that advertise in national aquarium magazines or go by word of mouth. Local fish shows are great places to meet breeders.