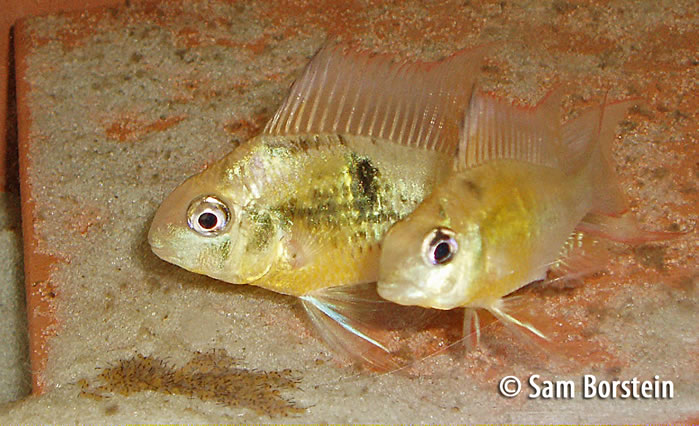 Above A breeding pair of Microgeophagus altispinosa. Note fry!! Male in background.. Photo by Sam Borstein.

Microgeophagus altispinosa is a substrate spawning cichlid native to South America. The fish was first described in 1984 by Staeck and Linke. The common name, Bolivian Ram is apt as it is found in Bolivia and in Brazil in rivers and flood plains. Synonyms for this fish are Crenicara altispinosa and Papilochromis altisponosa.

This fish is not sexually dimorphic, although size is often a reliable indicator. Males are always larger than females. Females get around 2.5 inches, and males around 3.5 inches.

Microgeophagus altispinosa is benthic— always found associated with the bottom region of the tank..

Microgeophagus altispinosa is found in rivers, flood plains, and streams in Bolivia and Brazil. The water is usually soft and acidic with a ph of 7.0 and a dh of 0.

Bolivian Rams are easy to keep. Although native waters are soft, we had luck keeping them in hard, Chicago water. For breeding, however, you will have better results using soft water. You could easily have a pair in a 15–20 gallon tank. These fish like to dig, so provide a substrate of fine sand or gravel. Add some rocks, caves and plants as this fish can be shy.

Microgeophagus altispinosa is a pair-forming species and the bond can last indefinitely. The fish will breed on stones and small flower pots. There are some reports that they will dig a pit and lay the eggs, but we have not seen this.

We kept two pairs in a 20-gallon tank. The tank was kept at 80F and we used R.O. water to which we added 1 teaspoon of Kent R/O Right per ten gallons of water when we did water changes.

Breeding takes place with the male and female  selecting a site such as flower pot. Breeding lasts 30–45 minutes with both members of the pair aggressively chasing away intruders.

Rearing behavior is typical of substrate-spawning South American fish. The female watches over the eggs as the male defends the territory. Pairs will lay between 40 and 100 eggs. After 2–3 days, the eggs are chewed open by the parents. The wrigglers are free- swiming about a week later.

Unfortunately, we did not have good luck with the parents raising the fry. Our two pairs shared a 20-gallon tank and perhaps the competitive pressure made the pair nervous. After a couple of spawns with no surviving fry, we decided to raise the fry artificially.

We prepared a 2-gallon plastic tank with a small airstone and 7.5 watt Junior Aquatics heater. One day post-spawn, we carefully moved the small flowerpot where the fish had spawned to the hatching tank. We added 2 drops of Methylene Blue per quart of water as an anti-fungal agent. This will turn the water a very dark blue. After six days, the fry were "belly whomping" and we began exchanging two quarts of the blue hatch water with fresh, soft, R.O. water prepared as mentioned above.

The fry double in size within a week. At a little over two weeks after their first meal, they are about one-quarter inch long and doing well.

You will occasionally find this fish in pet stores. Expect to pay about $8 for juvenile fish. Microgeophagus altispinosa is not difficult to find. It is on numerous wholesalers lists, so ask your local pet shop to order some for you.