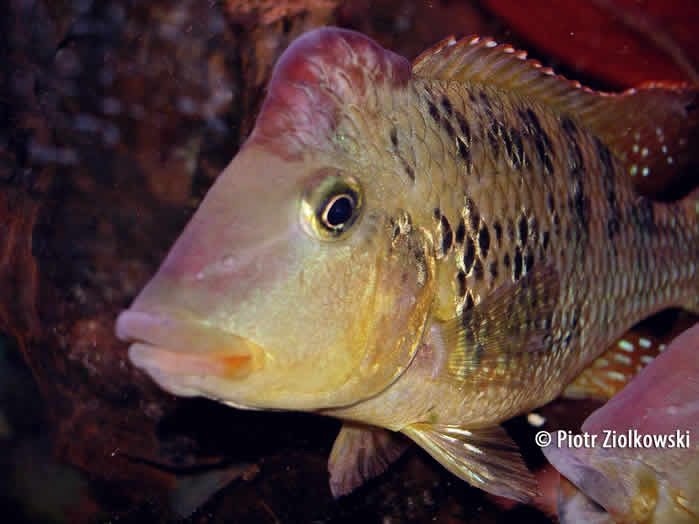 Geophagus steindachneri is a rarity— a mouthbrooding South American cichlid. More accurately, this fish should be called 'Geophagus' steindachneri since scientists may soon place this fish into another genus. Originally typed by Eigenmann and Hildebrand in 1910, it is native to the Rio Magdalena in Columbia and the Maracaibo basin in Venezuela.

Geophagus steindachneri's common name, the Red Humped Eartheater, is an apt description. Males of breeding age exhibit a reddish-hued nuchal (head) hump. Both males and females sift through the substrate frequently for food. Males get up to about 5 inches and female are somewhat smaller, topping out at about 4 inches.

Geophagus steindachneri exhibits fascinating behavior and is quite easy to breed.Geophagus steindachneri is not the most colorful fish, but it does have nice spangles of yellow and blue on the sides that are visible in the right light. I think it is an attractive fish and a offers a great "break" for the hobbyist who has bred a lot of African cichlids and is looking for something new.

Geophagus steindachneri is easy to keep, but it does demand good water conditions. This fish frequently stirs the substrate which can put a lot of waste in the water column. I performed regular partial water changes of 40-50% of the tank volume.

Since this fish "chews" the substrate looking for food, provide a fine, soft material. I recommend a sand substrate for this fish, but it can be bred over standard gravel or even in a bare bottom tank.

Feeding Geophagus steindachneri is easy. It readily accepts a variety of flake and frozen foods. I fed cichlid flakes, various pellets, spirulina flakes, frozen mysis and brine shrimp. All were eagerly gobbled up and this fish seems to be hungry all the time.

I obtained some (2M, 2F) young Geophagus steindachneri from fellow GCCA member Mike Garibaldi. I placed the fish in a 90-gallon tank along with some large angelfish and several green corys. The tank had a sand substrate, and soon the eartheaters were sifting through the sand. One nice side benefit of these fish is that the substrate stays "fluffy" and nice looking. These fish grow quickly.

At about 2.5 to three inches, one male "Steinie" developed a prominent hump with a reddish hue.

Geophagus steindachneri is easy to breed, but aggression can be a problem. Provide hiding places for brooding females and sub-dominant males. Once males mature— which can happen as early as 14 weeks post hatch— male to male aggression becomes the norm and can result in severe damage and death. One male per tank is recommended.

Spawning occurs with little if any preparation of the site. My fish spawned on a flat piece of quarry tile. The spawning sequence is quite different than Malawian mbuna. The female lays several eggs and picks them up in her mouth. The male then deposit his milt on the spawning surface and the female turns to slurp it up. My fish laid about 40-50 eggs. The female's buchal cavity was noticeably distended.

I left the female in the tank for about a week. Fearing that the male might harass her, I removed the brooding female and placed her in a dark, quiet 5-gallon tank with a small power filter.

At two weeks post-spawn, I began adding small amounts of live, baby brine shirmp to the brooding tank. This was a test of sorts. Would the female eat while brooding?I observed the female eating a bit, an interesting discovery.

At three weeks post-spawn, the female would release the fry for short periods of time. The fry immediately consumed freshly hatched baby brine shrimp. I had to sneak up on the tank to observe the free-swiming fry which stayed close to the substrate. When frightened, the female "nods" here head and the babies immediately return to safety of her mouth. Amazing behavior!

Over the next two to three weeks, the female allowed the fry to stay out for longer periods. Indeed, at slighly over two weeks, the female began discouraging the fry from returning to her mouth. I removed the female about a week later by quickly sneaking up on the tank and netting her out.

With regular water changes, the fry grow quickly and will start accepting flake food at around 30 days after becoming free-swimming.