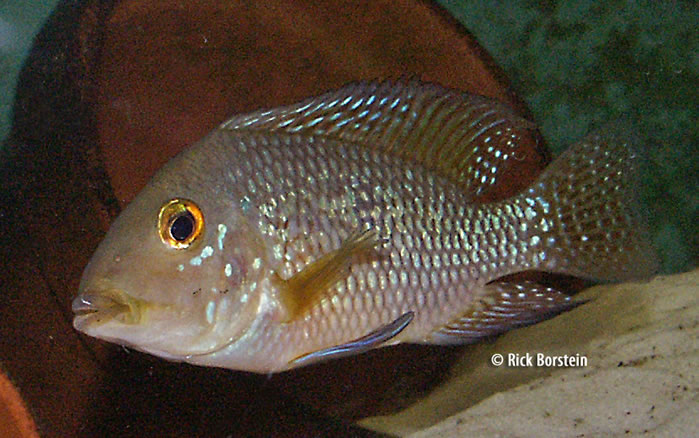 Geophagus brasiliensis is a South American substrate-spawning cichlid native to the coastal streams of eastern/southern Brazil and Uruguay. This fish has been known to science (and the hobby) for a long time as it was first typed by Quoy and Gaimard way back in 1824.

More accurately, this fish should be called 'Geophagus' brasilensis since scientists may soon move this fish into another genus.

Geophagus brasiliensis is a popular aquarium fish. It is easy to keep and breed, and readily available at pet stores.

Another contributor to the success of Geophagus brasiliensis is that it is quite an attractive fish! The overall background of both males and females is a greyish-green which is covered with blue-white pearly flecks. Thus, the common name— Pearl Eartheater— is an apt descriptor. Fins are either totally red or edged with red.

Geophagus brasiliensis is easy to keep. Although water parameters in the wild are on the neutral to acid side, they do fine in hard, Chicago water with a pH of 7.4-7.6.

The latin name Geophagus can be literally translated as "eartheater". This moniker is an accurate as in the wild, it forages in the sandy bottom of the river for small organisms and expells non-food items through the gills. In your aquarium, it will spend a considerable time digging in the aquarium substrate. For this reason, a soft sandy or fine substrate is recommended. Avoid large, heavy ornaments or rocks as these active diggers may undermine and topple the object.

My son Sam obtained four 2-1/2 to 3" Geophagus brasiliensis juveniles from one of GCCA's swap meets. Sam placed them in a 20-gallon low tank containing a sand substrate.

Once the largest fish— which we presumed to be a male— grew to about four inches, we started seeing breeding interest. We removed the second largest fish, which appeared to be a sub-dominant male, to a 75-gallon cichlid community tank. Hurting for space, we put the sub-dominant male back in the 20-gallon tank where he promptly pursued and eliminated the other male.

We were happy to see the "new" dominant male court the two remaining females. Unfortunately, the first several times the fish bred, they laid eggs on the tank glass and ate their spawn a day later. We (and by that I mean, my son Sam) were getting very frustrated with these fish.

Finally, on April 21, 2005, the fish spawned inside a 4" clay flowerpot which, ironically, had been in the tank the entire time. We promptly removed the flowerpot and eggs to a prepared 5-gallon hatching tank. The tank contained a sponge filter (Hydrostar #1) and we added an airstone about 3 inches away from the mouth of the flowerpot. We added three drops per gallon of Methylene to prevent fungus. We counted just under 100 tan-pink eggs in the spawn.

About half of the eggs hatched on April 25 and we had fifty or so free-swimming on May 1. We immediately began feeding freshly hatched baby brine shrimp. The fry doubled in size the first couple of days and can be switched to dry foods at two to three weeks post free-swimming.

$4 to $10 for juvenile fish at pet shops. Geophagus brasiliensis is widely available at local pet shops and pet superstores.

Report May 2005 by Rick Borstein and Sam Borstein.