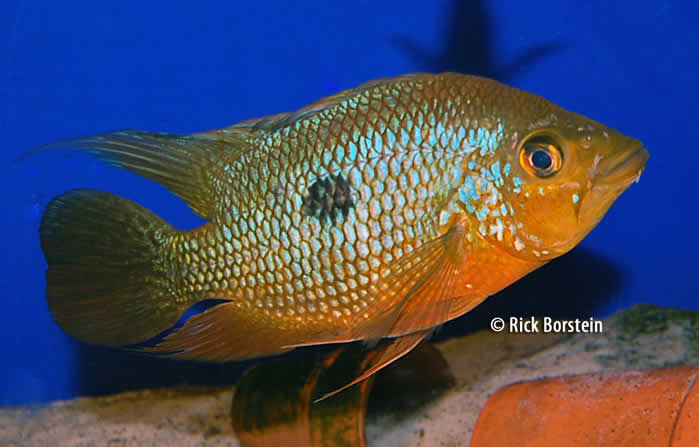 Caquetaia spectabilis is a beautiful and large predator. This large protrusible-mouthed ambush predator was first typed by Steindachner in 1875. C. spectibilis is one robust fish with a shocking assortment of blue, yellow, orange and green colors and is a must for the predatory cichlid enthusiast.

The derivation of the genus comes from the name of the Caqueta River, which enters Brazil. The species name spectabilis means striking in Latin, a very accurate description.

Male Caquetaia spectabilis can reach a foot in length. Females are generally smaller. There is not a reliable way to sex the fish other than venting them. Males supposedly have longer trailers, but this is a poor way to sex fish.

Caquetaia spectabilis is found in the Amazon River and its drainages in Brazil. It is an ambush predator and is associated with vegetation near the banks of rivers.

Big fish equals big amounts of waste, and this is true with Caquetaia spectabilis. This fish is not overly aggressive towards other species, but conspecific aggression can be high.

A large tank— at least six feet long— is needed for this fish. A pair can be kept in a 4 foot tank. Weekly water changes are a must and so is strong filtration. The fish will do fine in hard or soft water as long as the extremes are avoided. Provide the fish with lots of large flowerpots and drain tiles as hiding spots.

Due to the large protrusible mouths of this fish, be careful not to put in tankmates that are too small. Caquetaia spectabilis is capable of swallowing fish up to half their length.

Caquetaia spectabilisis are ambush predators, and use their mouth to suck up anything that will fit. In the aquarium this fish readily accepts food. I like feeding large Spectrum and Tetra Cichlid Sticks.

This fish can be difficult to breed. Some people say they have success with spawning them in R.O. (soft) water. I used regular Chicago tap water.

The fish pair off relatively young, but I think they take quite a while to mature. My experience and that of other hobbyists is that Caquetaia spectabili needs to be at least eighteen months old to breed . As such, this fish is definitely a project.

The pair will pick a territory and defend it a few days before spawning. Prior to spawning, the color of the fish intensifies. About 400-1,500 eggs are laid depending on age and size of the pair. For a substrate-spawning cichlid, they are not the best of parents.

When my father spawned them, he artificially hatched the larvae, which lead to good results. I decided to see if the fish would defend their spawn, and they did, but I got only about 30 fry. They did move the babies into a large cave with only one opening, which I thought was interesting. However, when the fry were free-swimming the parents seemed a bit confused about what to do next.

The fry are easy to raise, but are cannibalistic, so make sure you feed enough. They grow fast!

Six inch adults are not cheap. Expect to pay $30 or more per fish. Juvenlies up to 2 inches are more affordable at $8–$10. This fish is seldom available at pet shops, but may be ordered from farms in Florida. Your best bet is to try GCCA's Cichlid Classifieds.