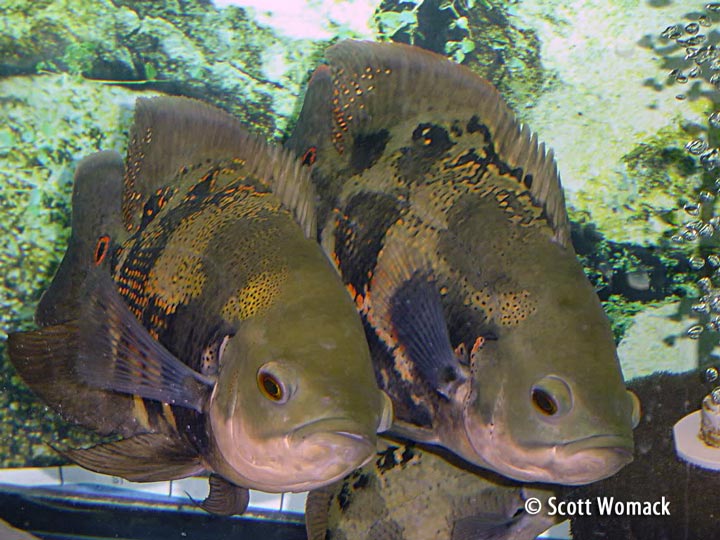 Astronotus ocellatus, whose common name is the Oscar, is one of the largest of the popular New World Cichlids. Although the Oscar can attain sizes up to 14 inches or so, it is rare to see one over 12 inches. They are a great cichlid to raise in a tank all by itself or a great cichlid to raise as a group in a tank. They are very intelligent fish and have personality. That’s right, personality! They learn very quickly when it’s feeding time and there is virtually no limit as to what an Oscar can do when enticed with food. They will, with a little training, eat out of your hand. I even know of one that will jump about 6 inches out of the water to get a treat. Oscars have long been a favorite of cichlid lovers and because they have been around for 50 years, there are several color variations of Oscars available. There are Oscars, Tiger Oscars, Red Tiger Oscars, Red Oscars, Albino Tiger Oscars and Albino Red Oscars, just to name a few. There were other color varieties that you just don’t see anymore, such as the Gold Oscar, the half black Oscar and even a long finned Oscar. The half black Oscar and the Gold Oscar were developed by a late friend of mine from the East Coast, Herb Fogel. To my knowledge, the half black Oscars were never released to the hobby.

Oscars are indigenous to central South America. However, it adapts so easily to water conditions that they are found in many lakes in the Southern United States. Like I said earlier, they get big and when they outgrow their tanks people dump them into these lakes. This is a BIG NO NO! The Oscars do fine, but in many cases they disturb the whole ecological balance of the lake and cause other species to disappear. . . just like the Nile Perch is doing to Lake Victoria.

The Oscar likes his water wet. Other than that, they aren’t the fussiest of fish. Their natural environment is the soft acid waters of South American rivers, but they tolerate just about any water conditions well.  The toleterate water temperatures of 72 to 85 degrees F with 76-78 degrees being optimum.

Oscars are big, messy fish. Regular partial water changes are critical for the health of the fish. Oscars kept in poor condition often get "hole in the head" or pitting which is extremely difficult to reverse. We recommend a water change of 25-50% weekly for this fish.

Oscars are predators and can have a mean streak although they will usually get along great with fish as large as themselves. I mention this under feeding because that’s exactly what you will be doing if you put anything smaller than the Oscar as it’s roommate. Oscars will and can eat anything. They will eat flake foods, pellets, worms, crickets, goldfish or anything else you can think of. I have seen Oscars eat whole jumbo shrimp as well as strips of steak. Babies will eat a finely granulated flake or newly hatched brine shrimp or anything else they can it into their mouths.

Oscars are relatively easy to breed. Sexing them is the tricky part. I heard that females don’t get as big as males, that males have humps on their heads, that they are impossible to sex. The truth lies somewhere in the middle. The best way to sex them is to let them pair off on their own. Keep about six in a large tank and they will do the rest. Remove the other fish and you have a pair. There are other ways though. I’ve never seen an adult Oscar with a humped head, I don’t believe that males of this species get them. Sometimes you might see a really old fish that way.

This is the way I like to sex fish. It works 100% of the time and works for just about all substrate spawners. Feed, feed, feed, something with bulk, like live goldfish. If you feed the adult fish heavy enough, the weight of the food in it’s stomach exerts enough pressure on the genital opening that the breeding tube will become slightly distended. If the breeding tube is narrow and points to the rear, it’s a male. If the breeding tube is wide and angles towards the front, it’s a female. Of course, sexing can be done this way but there’s no guarantee that a spawn will occur. Oscars, if paired this way, will usually spawn but other cichlids, like angels and discus generally will not.

Oscars are substrate spawners and will lay from 200 to 2000 eggs at a time. They will tend to their young, if in a separate tank from other fish. If they spawn in a community tank, they will get overzealous in protecting their young and either kill everything in the tank or eat their fry. If this happens, remove the rock that they laid the eggs on and hatch artificially. (Be careful of attacking parents.)

Oscars are readily available at most stores, but we haven't seen many that were really great specimens. Many fish are coming our of the orient and have poor ocelli (spotting). If possible, consider getting some wild stock (or near to wild stock) which generally exhibit much better spotting.