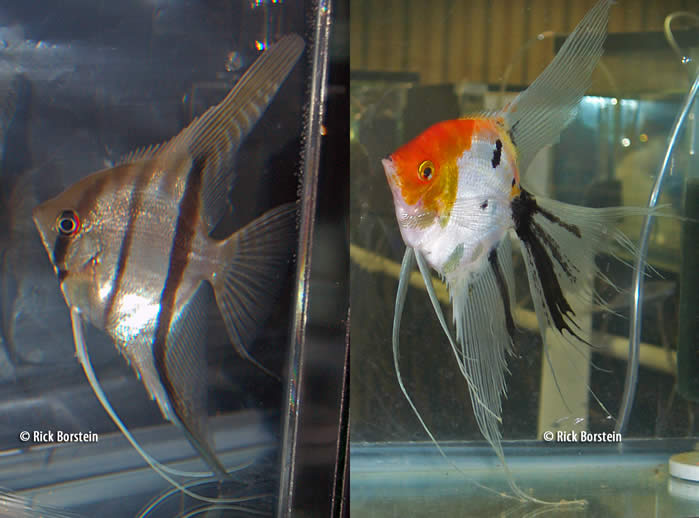 Pterophyllum scalare, whose common name is the Angel or Angelfish, was one of the first and is the most popular of the New World Cichlids brought into the United States. There are actually two species of Angels, Pterophyllum scalare and Pterophyllum altum. This article will concentrate on the former and the more common.

They are a relatively abundant fish along the length of the Amazon River and have long been a favorite of tropical fish lovers. They are rarely exported because there are so many variations available at reasonable cost, that it’s not a financially sound proposition. P. altum is more likely to be exported because there are no genetic mutations available (that I am aware of). Some colorful varieties of P. altum are in demand.

Author’s Note This is similar to what is happening with Bettas. For years only one Betta was imported into the United States, the Betta splendens. The male betta today is a far cry from the wild fish brought in 80 years ago. There are many other wild species of bettas out there and demand is reaching all time highs.

Their natural environment is the soft acid waters of the Amazon river, and they insist on you duplicating that in your home aquarium. They can live in a ph range of 6.5 to 7.2 but in order to spawn them they need to be in acid water (a ph range of 6.5 to 6.8). They like a water temperature range of 70 degrees to 85 degrees with 76-80 degrees optimum.

The Angel will survive on just about anything. If you want to breed them though, they prefer a varied diet and live or frozen foods are a must. They love brine shrimp, blackworms, tubifex worms, whiteworms, daphnia, glassworms, and baby guppies, just to name a few. Fry can and will readily devour newly hatched brine shrimp or any finely granulated food they can fit into their mouths.

Angels are not by any stretch of the imagination easy to sex. I have had some luck in the past sexing angels but this in itself, unlike other cichlids, is no guarantee of a successful spawning. The best way to sex them is to let them pair off on their own. Keep about six or eight in a large tank and they will do the rest. Remove the other fish or move them to another tank and you have a pair. A 20 gallon high tank is perfect for breeding pairs of angels. They will spawn on the floor of a tank, in a large flowerpot or on the leaves of a broad leaf plant. However, the preferred method is to put a piece of slate about 3 inches wide and 8-10 inches long leaning at about a 45-50 degree angle in the tank. They will pick at the slate until it is clean and then lay their eggs. Angels’ will lay from 100 to 500 eggs at a time, maybe more. They, like most South American cichlids, will tend to their young if in a separate tank from other fish. If you keep the fry in too long, they will disappear. If they spawn in a community tank, you will have a hard time separating the fry from the parents.

The best method is the pull the slate after the spawning is over and incubate the eggs by themselves. Put the slate in a gallon jar with the eggs facing down and a stream of air running along the eggs and place in a warm spot. An anti-fungal medication is recommended so that the infertile eggs will not spoil the fertile eggs.

The Angel is one of the most common of all tropical fish. There is probably no such thing as a fish store that doesn’t have angels. Certain colors and veiltail varities are hard to find.

Care must be taken when buying angelfish. If you want show fish or good breeder stock, buy from a reputable dealer. Some people indiscriminately attach erroneous and often made up names for Angels.

According to Angels Plus, one of the largest suppliers of quality Angels in the US, this is a list of all angelfish color mutations as of this writing. Note there are only eight. They are Gold, Gold Marble, Marble, Zebra, Smokey, Black, Half Black and Albino. Add the wild type angel (silver) and you have a total of nine types that make up all angelfish.

Reprinted from their website is this warning. Steve Rybicki states, "There are two other significant genes that affect the look of angels. One is Stripeless and the other is Pearlscale. These are not color genes but can have an effect on the look of the color genes. The other major gene people are concerned with is Veil, which simply affects the length of the fins. All angel hybrids are derived from the above listed mutations. Since you can have literally dozens of possible hybrids, to reduce confusion, I use the names that were originally given these fish by the people first making the cross and publishing the results. When I cross a Smokey with Pearlscale the result is a Smokey Pearlscale, not a Blue Diamond Crystal. Beware of the person renaming angelfish. Why would they do this? It couldn't be that they want to fool you into thinking they have something different so you would spend your money there, could it? Granted, not all Gold Marbles Pearlscales are identical. Some have been selectively bred to look a little different from other Gold Marbles Pearlscales, but that doesn't make one a "Red Headed Tangerine" angel unless that is the generally accepted name for that hybrid.

Every worthwhile mutation is written about in a national publication shortly after introduction to the hobby (within a few months). Ask what issue it is in if someone claims to have a new mutation that is worth having. If it's just a hybrid the person has, then you can make it too, if you want. By the way, people do not "develop" mutations. They are freak occurrences of nature. Significant and useful ones happen rarely, with angels, less than two or three dozen times in the last 50 years."