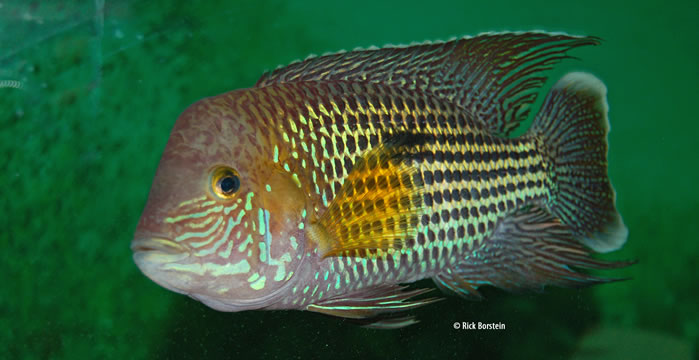 Above Andinoacara rivulatus . Photo of male in breeding color by Rick Borstein. 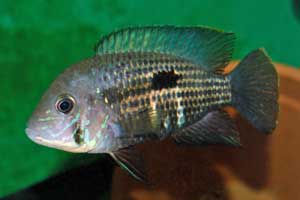 Andinoacara rivulatus is an aggressive, substrate-spawning South American cichlid first typed by Günther in 1860. A frequently encountered synonym for this fish is Aequidens rivulatus.

The Terror nomenclature
Andinoacara rivulatus is very aggressive and territorial. It will hold its own with much larger tankmates and will not hesitate to attack larger fish if it intends to breed. A number of hobbyists have kept this fish successfully with aggressive tankbusters such as Red Devils.

Some internet sources maintain that the Green Terrors in the hobby are not true Andinoacara rivulatus.

According to Fishbase, Andinoacara rivulatus is found on the "Pacific slope from the Esmeraldas River in Ecuador to the Tumbes River in Peru." Water conditions in this stretch vary quite a bit from a low pH to a relatively high pH. The climate is Neotropical.

Andinoacara rivulatus can be a challenge to keep and breed if you are not familiar with the care of aggressive cichlids. Green Terrors demand large tanks, clean water, suitable tankmates and lots of secure hiding places for sub-dominant individuals.

Regular partial water changes are important for the health of the fish. I kept my tank at 78F. In the wild, it is found at temperatures of 70 to 80F.

Andinoacara rivulatus is easy to feed as it will consume just about anything. In the wild, it is omnivorous. I fed Tetra Cichlid Sticks, HBH Soft & Moist Veggie, and Dainichi Veggie Deluxe.

I obtained an adult pair of fish from King Coral Aquarium in Mount Prospect, IL. My 15-year-old son Sam works at the shop and pointed the pair out to me.

Of course, I had to have them! Forty dollars later they were in a cooler on the way home!

I placed the Green Terrors in a 4-foot, 90-gallon tank containing a nine-inch Cichlasoma pearsei and a pair of Red Tiger Motaguense. The male terror was a bit over seven inches and the female was just under four inches.

Within twenty-four hours, you could tell that the dynamics of the tank had changed considerably. The motaguense were in hiding. The much larger pearsei— too big to squeeze into any hiding places— was showing some wear and tear. The female has staked out a spawning area on a piece of slate and the male was aggressively driving the other tankmates away.

I really should have removed the pearsei at this point…

A few hours later, the pearsei was shredded. His caudal fin was nearly completely gone, a third of his dorsal fin was missing and he'd lost 70% of his scales. I pulled out the near lifeless fish and put him in a 10-gallon tank where he eventually recuperated.

If you look closely at the mouth structure of a Green Terror, you will notice the impressive dentition and robust, powerful jaw structure. I should not have been surprised that Andinoacara rivulatus could exert its will on its tanksmates.

A few days later, the fish laid approximately 250-300 eggs on a piece of slate. The female aggressively defended the spawn site and male violently chased any other fish that dared to peak out. Three days post-spawn, the babies hatched out and four days after that were free-swimming.

Fry of Andinoacara rivulatus are the largest I have seen from substrate-spawning cichlids. The fry are immediately mobile and able to wolf down freshly hatched baby brine shrimp. Green Terrors are also excellent parents. If a visitor came anywhere near the tank, both parents aggressively charged the glass. I siphoned out about 25 fry to keep separately, but left most with the parents which raised them dutifully for about four weeks to close to 1/2".

Expect to pay about $5 to $8 dollars for a 1.5" fish. Andinoacara rivulatus are frequently available at local pet shops and are inexpensive as juveniles. If your local shop doesn't stock them, ask them to consult their wholesale list as these fish are not rare at all. Discerning hobbyists may wish to purchase hobbyist-bred fish where the color variety may be assured.