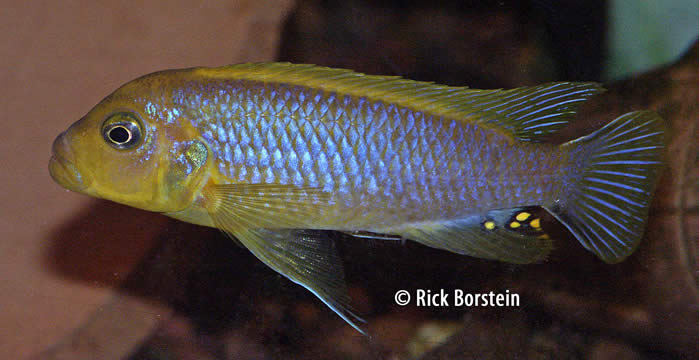 You won't find a lot of information about Pseudotropheus sp. "lime nkhomo" on the Interrnet. For one thing, the "sp" designation means that this is not even an officially recognized species yet. It came into the USA in 2000, but I don't know who first discovered the fish.

The best reference for this fish, and virtually any other "new-to-the-hobby" Malawian fish if Ad Koning's comprehensive Malawi Cichlids in their Natural Habitat available from Cichlid Press. According to Ad, this fish is closely related to Metriaclima daktari.

Metriaclima sp. "lime nkhomo" is one of the smallest Pseudotropheus. Males top out at just under three inches. Females are a lot smaller, generally no longer than two inches. The fish are found at several locations in the lake and Mr. Konings notes that there are several variants in the hobby. The one we see most in the midwest US is the Nkhomo variety which comes from Nkhoma Reef, near Benga in Tanzania.

Males of this variety exhibit a chartreuse undercolor with violet-blue flanks. Females are harder to describe. They are silvery-purple with some green and a yellowish-green dorsal fin.

Metriaclima sp. "lime nkhomo" is closely related to at least two other proposed species which makes identifying exactly which species you have extremely difficult

Further complicating matters, is that newly sexually active males of the nkhomo variety exhibit only a blush of blue-purple on the flanks while older males, such as the one above, get quite blue indeed.

It's easy to get caught up in this, but I would suggest finding a reliable source and viewing the adults prior to purchase. You may not know exactly what you're buying, but you'll know how they'll turn out. I can live with that!

Metriaclima sp. "lime nkhomo" is found in waters 15-25 meters over sandy bottoms. Other varieties of the "lime" are found in shallower water of 5-15 meters.

Metriaclima sp. "lime nkhomo" presents no special problems for the aquarist. It likes hard water and temperatures from 75 to 80F. It's a relatively aggressive little fish, easily holding it's own against larger Pseudotropheus and mbuna.

You won't have any trouble feeding Metriaclima sp. "lime nkhomo". This fish will greedily consume a variety of prepared foods. I do recommend feeding a good quality flake food containing vegetable matter to all Pseudotropheus. I fed Tetra Cichlid flakes, Spirulina flakes, and Tetra Cichlid Sticks.

I obtained three females and one male fish from a club member who was having trouble breeding them. I placed the fish in a 125 gallon tank in my fishroom where they were housed with about twenty other mbuna and Pseudos.

At the time of delivery, I could see that the fish were not sexually mature, but I didn't know what to look for in the male. A call to fellow GCCA member Sam Miller put things straight. Sam explained that when a fish has a bluish-purple sheen on the side, it's a male and breeding will commence.

Surely enough, in about a month, a male colored up and I had a female holding. They breed in typical fashion for mouthbrooders, no surprises.

Eager to score Breeders Award Program (BAP) points, I stripped the female of 15 eggs which I placed in a commercial egg tumbler using Acriflavine Plus as an anti-fungal. Twenty days later, the baby fish were eagerly eating Cyclops-eeze. The fry grew quickly and are easy to raise.

My fish bred several other times and the females were very good holders, holding eggs to 14 days in a very busy tank.

As a general observation, many Pseudotropheus do better in spacious surroundings. They seem to color up faster and breed more often.

After I bred this fish, I traded it back to the original owner. This is one of the very nice things about being in a club like the GCCA. Lot's of great fish and a lot of nice people to meet!

At retail, expect to pay $16 to $18 each for 1.5 inch long fish . Fry, if you can find them, are 3$ to $4 each for three-quarter inch long specimens. Metriaclima sp. "lime nkhomo" is not a common fish at pet shops, but is fairly popular at the present time among hobbyists. You will find it fairly regularly at GCCA meetings, auctions and swap meets. It is also listed by many wholesalers on the Internet, so you shouldn't have much trouble locating some for your tank.