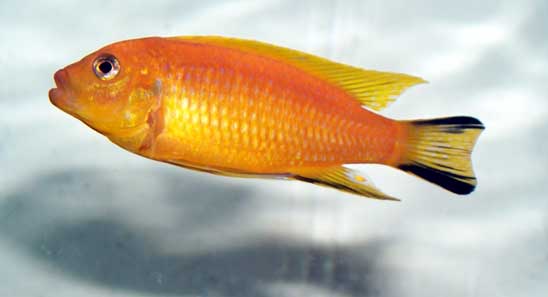 Metriaclima daktari is colorful mouthbrooder native to Lake Malawi in Africa. It was reportedly collected near the southern end of the lake about ten to fifteen years ago. There is an article in the Cichlid Yearbook Volume 3 which contains a few details of the fish and where it was collected. Apparently "daktari" is the Swahili word for doctor, hence the name.

Like most other Mbuna, it is a harem spawning fish. It is best to provide a single male with multiple females.

Metriaclima daktari is sure to be a popular fish. It is colorful— I really love yellow fish! — hardy, adaptable and sexually dimorphic.

Note: We originally published this report as Pseudotropheus daktari. Metriaclima daktari is the correct genus.

Reports say that this fish occupies positions midway between sand/gravel and the large boulders of the lake.

Pseudotropheus daktari is quite easy to keep. However, this is a fairly aggressive fish. Make sure you provide multiple females to divert aggression by the male or, alternatively, house them with tankmates of a similar dispostion. I kept my trio of Pseudotropheus daktari in a forty gallon breeder along with six Haplochromis ismaeli and six Haplochromis moorii with no problems.

As with other Africans, regular partial water changes are a must. I'm a zealot and change 50% of the tank every week, but I suspect in tanks less crowded a 33% water change every other week would suffice.

I am not aware of any reports of what this fish feeds on in the wild. In my tank, the Pseudotropheus daktari eagerly devoured all kinds of flake and frozen foods including spirulina flakes, Tetra Cichlid Flakes, New Life Spectrum pellets and Tetra Cichlid Sticks.

It is easy to tell the male from the female. Males are bright yellow with black edges to the tail. Females have the same tail pattern, but have an overall pink-tank body color.

I suggest starting with a group of six to eight fry and raising them up together. At ten to twelve months of age, a dominant male will start to color up and take over your tank.

They breed just like other mouthbrooding mbuna, no surprises here. Despite the aggressive tank I kept them in, the females were very good holders. I stripped the female at 16 days post-spawn, and the fourteen fry belly-whomped in a bare bottom tank for four more days before free swimming.

Like the parents, the fry are voracious. I started mine out on Cyclop-eeze (a brine shrimp replacement) and switched them at 5 days to crushed flake food. Fry are a pinkish-tan color.

$3 (fry) to $15 U.S for adults. This fish is not particularly hard to find. It's on many wholesale lists, and is kept on an irregular basis by GCCA club members. If you like bright yellow fish, and can manage the aggressive tendencies, I highly recommend trying Pseudotropheus daktari.