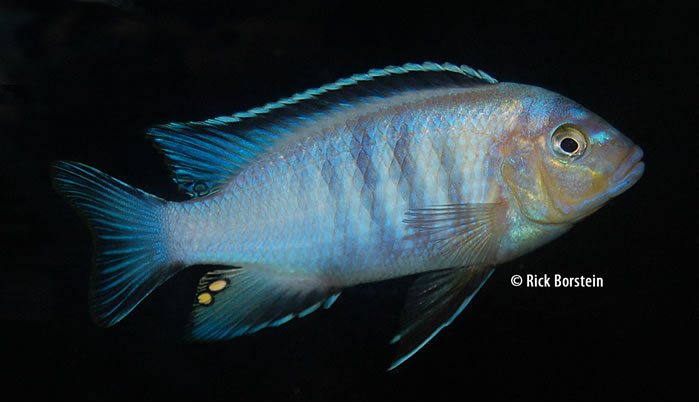 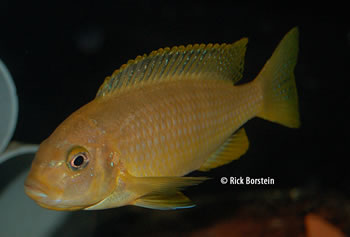 The species name "flavifemena" means "yellow female", an apt description for females which are a nice tan-yellow. Males vary in color depending on their mood. Normally, the dominant color of the fish is an ice-blue, with a prominent black dorsal. When breeding, the blue color deepens and the a yellow patch brightens behind the gill plate.

Metriaclima flavifemena is one of the larger mbuna. Males may exceed five-inches in length. Females stay just a tad smaller.

The common name for this fish is Zebra Black Dorsal

Metriaclima flavifemena is found in the intermediate habitat (both rocks and sand) usually at no more than 25M deep.

Metriaclima flavifemena is easy to keep. Like other Mbuna, breeding males can be aggressive, but if you've kept Mbuna successfully you should experience few problems. Since this is a large and late maturing fish, a large tank of 55 gallons or more is recommended. Temperatures of 76–80F work well. A fine sand or gravel substrate is recommended.

In the wild, Mbuna of the intermediate habitat are unspecialized feeders. Still, I'd err on the side of caution and feed a veggie-heavy diet. I fed HBH Graze, Dainichi Veggie Deluxe, HBH Soft and Moist Spirulina, and occasionally Extreme or Spectrum pellets.

I obtained a group of eight fish from fellow GCCA Member Mike Helford. Mike had a large number of Metriaclima flavifemena housed in a 200 gallon tank. I am a big fan of yellow cichlids, so this seemed like a great fish to me!

I picked out several young two-inch fish and brought them home where I placed them in a 125 gallon tank. This tank had many PVC hiding places and a find sand substrate.

I expected maturity and breeding in short order, but this fish turned out to be more of a project. Most Mbuna I've had will become sexually mature breed at about three inches or so, but not Metriaclima flavifemena. It took me about a year to grow these fish up to four-inch breeding size.

When the fish were approaching about 3-1/2 inches, I noticed a slight blue sheen on one of the fish. Over the next month, this fish morphed into the dominant male.

My son Sam observed the fish spawning and reported to me that they bred in typical Zebra fashion. In fact, they bred a lot! The males spawned with four different females inside of a month.

I let the first female hold for 16 days and stripped her of 22 fry at the heads and tails stage. We also stripped the largest female immediately after spawning of 61 eggs!