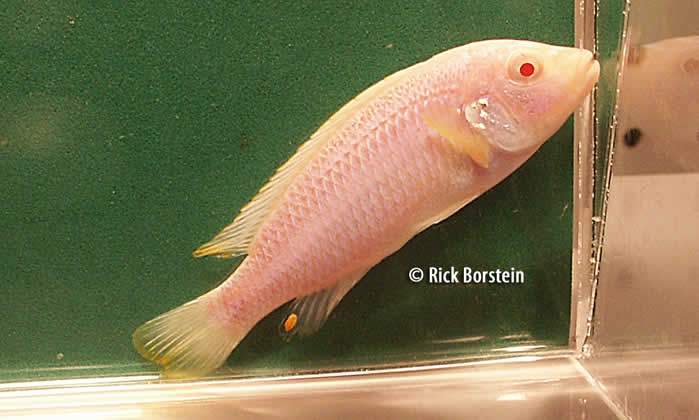 One common name for this Melanochromis vermivorus is the Purple Cichlid. Males get a rich horizontal blue-purple lines with a cream or grey undercolor. Males approach 3.5" with females staying slightly smaller. The females are colored similarly, although not as brightly. The egg spots are also not as prominent.

The Albino variety— pictured above— is easy to sex. Males are pearly white. Females have a golden hue.

Melanochromis vermivorus is often found in schools always closely assocatied with the rocks. This fish has been found in water depths from a couple of feet all the way down to 100 feet. Water conditions are in the lake are 7.0 to 8.5 pH and tenmpertaures of 74 to 77F.

Melanochromis vermivorus is not difficult to care for, but do heed the aggressive tendencies of this fish. It should only be kept with other moderately aggressive fish. I suggest a 40 gallon or larger tank with lots of rockwork, PVC or other hiding areas. Provide a flat slate or other surface for the breeding site if you want to get babies from this fish.

I obtained eight, 1.5" juvenile Melanochromis vermivorus at a GCCA Swap Meet. At the time, a number of club members were keeping and breeding the fish. Although I do not normally like albino fish, the golden hue of the albino females was attractive.

I placed the eight young fish in a 75-gallon tank filtered by an AquaClear 500 and maintained the tank temperature at 78F. I performed weekly, 50% water changes. Tankmates included various Pseudotropheus species and some West African tilapias. I added several cichlid condos (PVC tubes glued together) and rockwork.

The Melanochromis vermivorus grew quickly and when the largest fish reached approximately 3-inches, he began to vigorously pursue and attack the two other sub-dominant males. Fortunately, there were enough other fish in the tank to buffer the aggression and I experienced no losses.

After a water change, I witnessed spawning interest and shortly thereafter I found a female holding. I left the female in the tank for 16 days and then netted an stripped her of 14 nearly free-swimming fry. I moved the fry to a 5-gallon grow out tank and immediately fed newly hatched baby brine shrimp.

The babies grow quickly and reach about 3/4-inch in length after 10 weeks.

Melanochromis vermivorus is occasionally available in shops that specialize in African cichlids. Place a free wanted at on GCCA's Cichlid Classified because, at the time of this writing, this fish is available in the club.