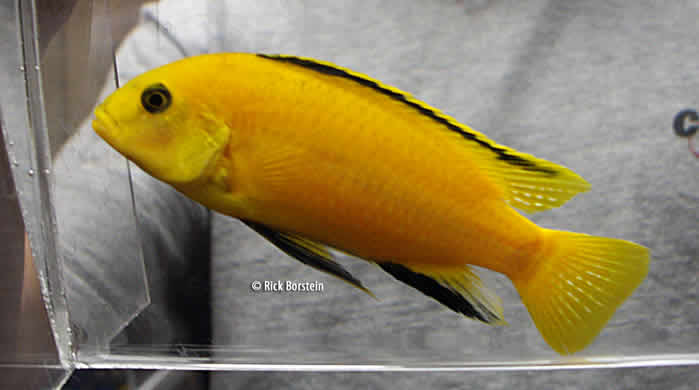 Confusingly to some beginner cichlid keepers, is  available in other color forms. The blue-white form is the most often found in the lake, but there is also a Labidochromis caeruleus "Lundo" which is very attractive.

This fish is attractive, easy to keep and easy to breed. Compared to many mbuna species, it is not very aggressive. These positive traits all add up to a great fish!

Unlike most Malawian cichlids, both the males and the females are very attractive. The dominant male in the group will generally be a brighter yellow and have a glossier, darker and more prominently-black edged dorsal fin.

Labidochromis caeruleus is endemic to Lake Malawi (Africa) and is found in two distinct biotopes; rocky shorelines and in Valisneria (plant) beds. They are found at depths of 6 to 120 feet. In the wild, they have been observed feeding on a variety of invertebrates and snails.

Labidochromis caeruleus likes hard alkaline water around 76-82 degrees, although they will tolerate slightly higher or lower temperatures. I have kept and bred them in Chicago water with no problems at all. Regular partial water changes are essential to the well-being of the fish. Keeping them with other moderately aggressive Malawian cichlids presents no problems. Recommended tank size for five adults would be a 30 gallon-long tank or larger.

You can feed Labidochromis caeruleus just about anything. A good quality flake food and cichlid pellets occasionally supplemented by frozen foods will work well. Include a good vegetable flake such as HBH Graze.

Labidochromis caeruleus is one of the easiest mouthbrooders to breed. I recommend that you purchase five or six juvenile fish and raise them up. They will breed at six months of age or about 1-1/2 inches in length.

Breeding occurs in the typical mbuna fashion, so provide a piece of slate or other smooth surface for the "act". After breeding, I remove the female to a well-planted "maternity" tank.

Females are generally good "holders" and will refuse food for up to four weeks. Because going for food for so long can critically weaken the female, I generally strip the eggs from the fish. At two weeks, the babies will be at the "heads and tails" stage. After three weeks, the babies are nearly fully formed. My preference is to strip 12–14 days and bubble them in a commerical egg tumbler.

January 2004 Update:  Lately we have seen some crossing back from the yellow variety to the blue/white variety in the hobby. We have regularly seen two yellow individuals when mated to produce a mix of yellow and blue/white fry. It should be noted that virtually all the fish in the hobby are descended from just a few individuals imported in the mid-1990's. This fish is apparently very rare in the wild. Fortunately, we have just started to see new yellow individuals imported from the wild. These wild fish should be used to strenghten the current yellow fish in the hobby.

Fry Up to 5$. Adults $10 to $15. You can find the yellow variety of Labidochromis caeruleus almost anywhere. It is very common, but no less fun and attractive to keep. The plainer blue-white variety is rather hard to find. If you ask around a GCCA meeting, you'll undoubtedly find someone who has some to sell or trade with you.