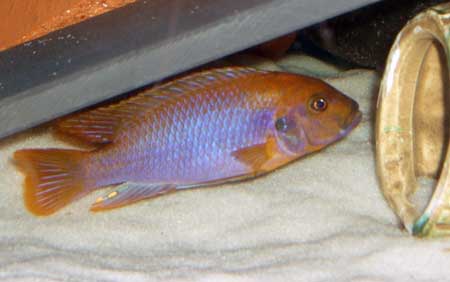 Iodotropheus sprengerae was first described in 1972 by Oliver and Loiselle. It is considered one of the classic fish in the hobby. Out of the enire Iodotropheus genus, the Rusty Cichlid (common name) is the only one that is generally available in the hobby.

Although the word "Rusty" does not seem like it would depict a colorful fish, adult males have a beautiful purple and rust sheen. Sexing Rusty Cichlids can be difficult. Males are larger than females, have more pronounced eggspots than females, and more of a purple hue. A male Rusty will top out at about 4 inches. Female get up to about 3-3.5 inches.

Rusty Cichlids are very hardy and easy to keep. Like all Malawian cichlids, it likes hard water. A temperature of 76 to 80F is optimal.

Iodotropheus sprengerae is very peaceful for an mbuna. A group of 6 to 8 adults could easily be kept in a 40 gallon breeder, with very few issues. This fish can also be kept with some of the more peaceful Malawians with no problem. The only time I observed aggression in this fish was during spawning, but even then, it was very minimal.

Iodotropheus sprengerae is an herbivore, but will do okay if fed some food higher in protein. Keep the fish on a fiber-rich diet. I fed mine HBH graze, Dianichi Veggie deluxe, Spectrum, and baby brine shrimp.

Rusty Cichlids are supposedly easy to breed. I know many people who had no problem breeding these fish. I, sadly, am not one of those people.

My story with Rusty Cichlids goes back to the November 2005 Ohio Cichlid Association (OCA) Extravaganza.

When I saw Iodotropheus sprengerae available at the OCA convention, I knew I had to buy them. There were not any in stores near me that were for sale— this once popular fish seemed to disappear. I bought eight Rusty juvies so that I would get at least one of each sex. . . a good habit to practice if you want to breed fish.

The fish were small, but within four months started breeding. The first spawns were not fertile, but I was not surprised because the fish were young. After about eight spawns, I was getting angry.

I watched these fish spawn. They would hold for three days, and then drop. I eventually tried stripping the fish and the eggs would go bad within 24 hours.

One day while viewing the "Rusty Tank", I noticed that none were eating. All eight of my Rusty cichlids were holding, which is not right. This fish is not a bi-parental mouth brooder! Unable to obtain a male Rusty, I had to sell the group.

Chapter Two began in September, 2006 at a GCCA Cichlid Classic convention. I purchased a bag of six full grown Iodotropheus sprengerae. It took me a while to get the fish a permanent home, as they bounced from tank to tank. I finally settled the group in my 58 with some West Africans. Everything in the tank was fine except the Rusty Cichlids would not breed.

Four months went by and still nothing, and by that point they should have spawned. This time I had all males! At this point, I was extremely ticked off and, due to my low patience level, these fish were about to get the boot.

Luckily this story has a happy ending. On the eve of the night the fish were to be shipped out to a friend Texas, they spawned. Only one of the six fish was a female.

Rusty Cichlids are good holders. Mine held for eighteen days before I stripped her of free-swimming fry.

Be careful when raising these fish as feeding too much baby brine tends to give these fry digestive issues.

For juvie Rusty cichlids, you are looking at about 3 to 4 dollars each. Adults will probably run you 8-10 dollars each at a pet shop.

In the mid-late 1990's this fish was very popular, but now are kind of difficult to find. Occasionally they will pop up in a pet shop or an auction or swap meet.