Above A 9-inch Fossorochromis rostratus male. Photo by Rick Borstein 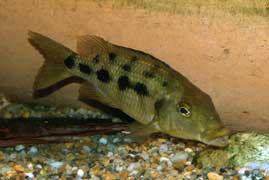 Fossorochromis rostratus was first typed by Boulenger in 1898, yet you don't find many accounts of hobbyist spawnings until the last ten years.

Fossorochromis rostratus is a large, mouthbrooding Malawian cichlid that reaches lengths of up to ten inches. It's a large, fast swimming piscivore and you'll need a big tank to keep it. It's also a beautiful fish, but I have seen quite a bit of difference in individual coloration. As you'd expect, they are most dramatic when in breeding colors.

This is a fish for the intermediate to advanced aquarist who is patient. Males do not reach sexual maturity until they are at least eight inches long. Plan on allowing at least two years for a fish to get this big.

One curiousity about this fish is that when frightened, it will quickly dive into the substrate and bury itself. Fossorochromis rostratus can do this with remarkable speed.

Although this fish does not have a common name, you'll hear a lot of cichlid hobbyists simply refer to them as Fossos

Fossorochromis rostratus has similar requirements to most Malawian cichlids; hard water and temperatures from 75 to 80F. Provide a soft substrate such as fine gravel or sand as this fish can be damaged by it's tendency to dive into the substrate when scared.

Because this is a large fish, I recommend a 100 gallon tank for a group of six to eight individuals. Large fast-swimming fish like these do not do well in small tanks.

Fossorochromis rostratus is very difficult to sex until it obtains very large sizes. Subdominant males look exactly like females! For this reason alone, this can be a challenging fish to breed.

I had obtained two five-inch individuals from a fellow GCCA member and placed them in a 65 gallon tank for about ten months where they grew to 7 and 8 inches respectively. At one of the GCCA auctions, I noticed a pair of Fossos on the auction table. These big fish were bagged separately and taped together, but the male didn’t look too good. Sure enough, he had kicked the bucket by the time the item came up for bid. I picked up the female for four bucks . . . a steal for a big fish.

Fossos aren’t really that aggressive, at least not to con-specifics in my experience, so this was kind of a surprise. A short while later, I moved the pair to a 100 gallon tank and they spawned about three weeks later.

Provide ample hiding places for the female and a large, flat rock for the pair to use as a spawning site.

I allowed the female to hold the eggs for eleven days and then stripped her of about 35 very large fry with prominent yolk sacs.

I began feeding the young fry at 20 days with Cyclops-eeze and they are fast growers. The young look exactly like the females.

Fossorochromis rostratus isn't often found at pet shops. When young, they just are not that interesting in appearance. In addition, most shops don't have a ready clientele for fish that gets big and need large tanks.

Fossorochromis rostratus is readily available from wholesalers, however, so ask your shop to order for some if you desire this fish. This fish is occasionally available at GCCA Swap Meets and Auctions.