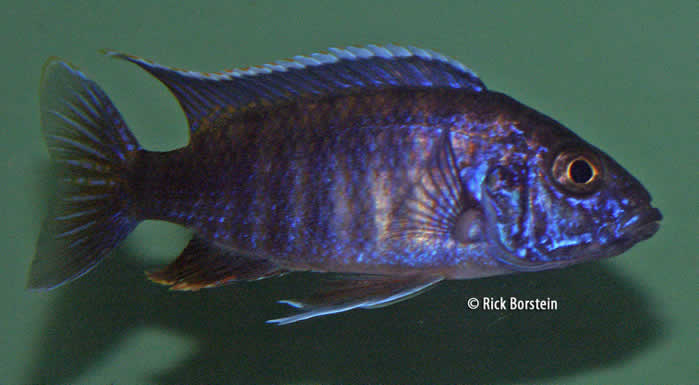 Aulonocara walteri is a moutbrooding, Malawian cichlid first typed by Konings in 1990. Technically, this fish does not have full nomenclature yet, so I probably should call it Aulonocara sp. "walteri".

Aulonocara walteri is typical of other Malawian peacocks. Brightly colored males with a lot of blue and drab, barred females. The common name, "Blue Face Peacock", is appropriate as males have the greatest concentration of color on the head. In preparation for breeding, males become a deeper blue and the color extends further down the body. Some male Aulocara walteri also exhibit yellow or tan coloration on their upper flanks.

Males grow to over 4 inches. Females top out at slightly over 3 inches.

The common name for this fish is The Blue-Faced Peacock

Aulonocara walteri is found near Likoma Island in Lake Malawi. Although most of the jacobfreibergei group are rock dwellers found at 15M and below, this fish has been found in as little as 3 meters of water. They are usually found at the intersection of sandy and rocky habitats.

As always, regular water changes are important. I suggest at least a 30% water change every other week. In my case, I do about 50% weekly.

Males can be aggressive to each to other, so an aquarium of four feet or longer is recommended if you have a large group of fish.

Aulonocara should not be kept with more aggressive mbuna such as Pseudotropheus or Metriaclima species. Of course, only one Aulonocara species per tank . . . they will interbreed!

I have successfully kept Aulonocara with a mildly-disposed Tanganyikans such as the Brichardi types.

Aulonocara walteri is easy to feed and accepts a wide variety of foods. I fed spirulina flakes, earthworm flakes, cichlid flakes and frozen mysis shrimp. I believe offering a variety of foods is of benefit to these fish.

In the wild, Aulonocara hover over the sand and make use of sensory pits located on the lower snouth to detect invertebrates moving in the sand. Once they detect movement, a fast plunge into the sand rewards this fish with a tasty snack. In the aquarium, you can observe this behavior if you provide a sand substrate.

Aulonocara walteri is easy to breed. For best results, I suggest a species tank. Supply one male and several females. In my case, I had one male and four females. Provide a flat piece of stone (slate is good) for the breeding site.

I should admit that I broke the "species" rule due to lack of tank space. I kept adult Aulonocara walteri in a 90-gallon tank with some juvenile Metriaclima hajormaylandia. The Aulonocara walteri were quite a bit bigger, so it wasn't a problem.

Males will display to females and draw them to the breeding site where breeding ensues in typical Aulonocara fashion. Brood sizes are in the 20-30 range.

In my experience, females are very good holders, successfully holding the fry to term. I stripped fry at 18 days and they had just a bit of a yolk sack remaining. The babies will take freshly hatched baby brine shrimp immediately.

The fry grow fast and have the drab coloration of the females until about four months of age.

Aulonocara walteri adults are in the $14 to $20 range.