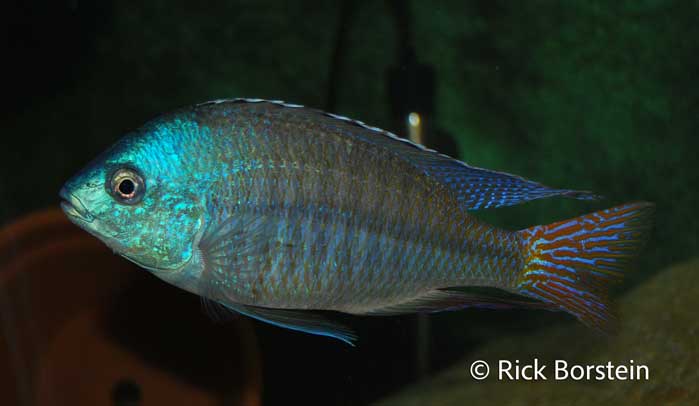 Above: Protomelas labridens Photo by Rick Borstein. Video available below.

Protomelas labridens, is a large, mouthbrooding haplochromine cichlid from Lake Malawi, Africa. This fish was first typed by Trewavas in 1935 and it is rarely exported to the hobby.

Females and juveniles, like all most Protomelas species, have one or sometimes two dark horizontal lines that extends from behind the gill plate to the base of the caudal. Males are variable in appearance depending on their mood. Generally, males have a bright blue head, an overall blue sheen, variegated red tail and a red speckled dorsal edged in black and white. Females are relatively drab by comparison with an overall tan-grey color with some gold sheen and highlights. Males get up to eight or more inches long and females stay an inch or so smaller. 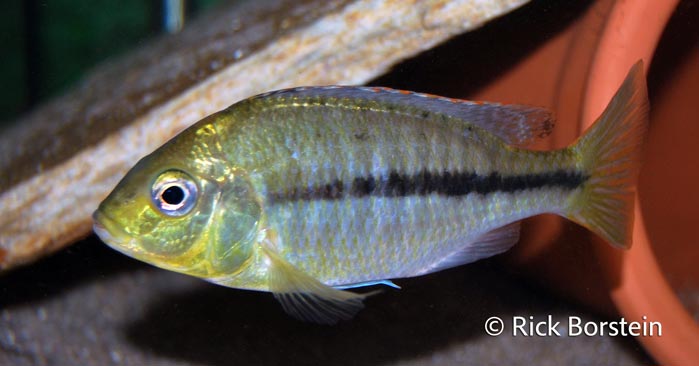 Protomelas labridens  is found at depths of 5M or greater generally near vegetated areas in shallow bays.

Protomelas labridens is not a very aggressive cichlid, but since it is a large fast swimming fish, tanks of at least four feet are required. A six foot tank would be preferred. Water temperature in their natural habitat of Lake Malawi is between 74°F and 79°F with high hardness. I had no trouble with this fish in Chicago water at 78F. I performed regular partial water changes each week of about 25% of the tank volume.

In the wild, Protomelas labridens picks small invertebrates from plant leaves. They are not difficult to feed in the aquarium. I offered Tetra Cichlid Sticks, Exreme Big Fella, Dainichi Veggie Deluxe and the occasional treat of Repashy gel food.

I obtained a group of six, adult Protomelas labridens from fellow GCCA member Mike Helford in April, 2013. Mike always seems to have interesting and unusual Malawian cichlids and I was fortunate that he was looking to free up some tank space. Mike kept his group in a six-foot 180 gallon tank. I moved my group into a 4-foot, 90 gallon tank. Mike also gave some Otropharynx sp. "Silver Torpedo" which joined the new arrivals. This tank was filtered by Marineland Tidepool II filter and had a sand substrate. I added several large flower pots and slates so there was ample rockwork in the tank.

After a couple of weeks of fattening up the fish with frequent feedings of Repashy Spawn and Grow, I did a very large water change (about 80%). Shortly thereafter, I observed my first female holding. I allowed the female to hold for twelve days after which I stripped her of 42 fry at the heads and tails stage. I moved the fry in to a clean 2 gallon container which I maintained at 80F. Eight days after stripping, the fry were free-swimming and I immediately began feeding baby brine shrimp. A week later, I moved the babies to a 5-gallon tank for grow out switched the babies onto CyclopsEze abd NLS powder. At two weeks, they are eating flake and showing the distinctive stripe on the flank.

Protomelas labridens is not a fish you will find in the hobby very much. Until recently, only wild specimens were available. I would guess that wild caught adults would go for $50-80 each. F1 fry, if you could find them, would be $5-8 each.

Report May 2013 by Rick Borstein