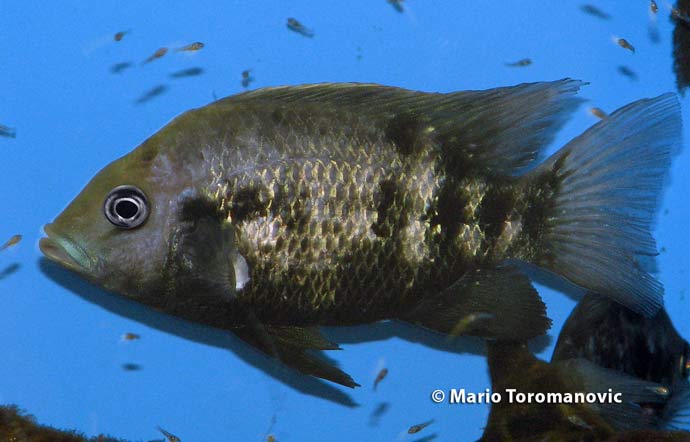 Males Nosy Be’s are larger than females. Males can get up to 10 inches while females stay a couple of inches smaller.

Restricted to freshwater habitats of northwestern Madagascar, from the Sambirano River northward to the Mananjeba drainage (Andranomaloto River), and including the crater lakes of Nosy Be island.

Ptychochromis oligacanthus does not present many difficulties (outside of being an aggressive fish). The waters in which they are found include a wide range of water parameters, with pH between 6.5 and 7.5 and temperature between 75º and 82ºF. My pair did just fine in our Lake Michigan water at the temperature of 80º F and pH 7.6.

Ptychochromis oligacanthus are omnivorous. In the wild, they feed on insects and crustaceans and in my tank they did fine on the diet of flake and pellet food, frozen Mysis and brine shrimp, with the occasional treat of live black worms.

I purchased eight juvenile fish at the American Cichlid Association Convention held in Indianapolis in July 2012.  At the time I bought the fish, they were probably about 5 -6 months old and approaching two inches in length. Over the next eight months, I moved the fish from tank to tank but due to the aggressive nature of this fish the group was became just two fish. Fortunately, the two remaining fish were a pair, finally settling in twenty gallon tall tank. At this point, I noticed that bigger male fish  was aggressively beating on the smaller one, so I separated tank with plastic egg crate louver. I modified the egg crate to include hole out fashioned from PVC pipe which just big enough to allow the female to pass through to the male’s side of the tank. The separation strategy worked perfectly. The female stayed on her side, and moved to male’s side, when he was calm. A few weeks later, after heavy feeding and large water changes (50% every 3-4 days) I noticed both fish turn very dark, a not uncommon color change in Central American species.

I knew these fish were substrate spawners, so I placed few terracotta flower pot saucers in the tank and the next day they spawned. Both the male and a female guarded the eggs. The eggs hatched three days later and then the parents moved the wrigglers immediately to a pleco cave nearby. Interestingly, the parents moved the babies several times before night day post hatch when the fry were free swimming.  I immediately introduced the fry to their first food, live baby brine shrimp. Ptychochromis oligacanthus are excellent parents, even fierce parents. In fact, the male jumped out of the tank trying to grab my hand, while I was feeding them! 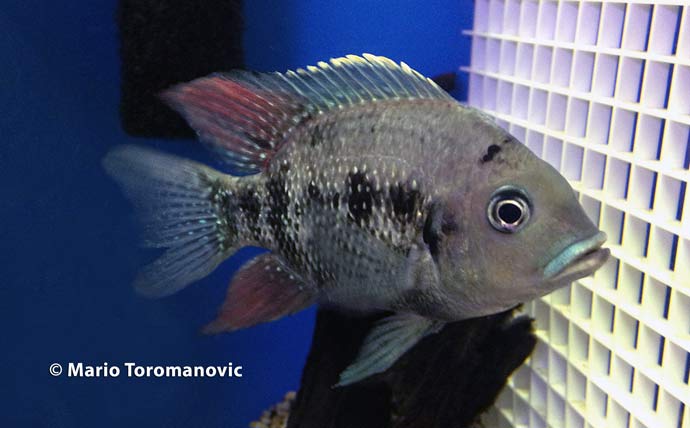 Ptychochromis oligacanthus is not a fish you would find at your local pet shop. They are pretty aggressive and they are not very colorful,so they are kept by only a few dedicated cichlid hobbyists. They are not bred commercially, but juveniles are available from hobbyists in the $8-$10 range.