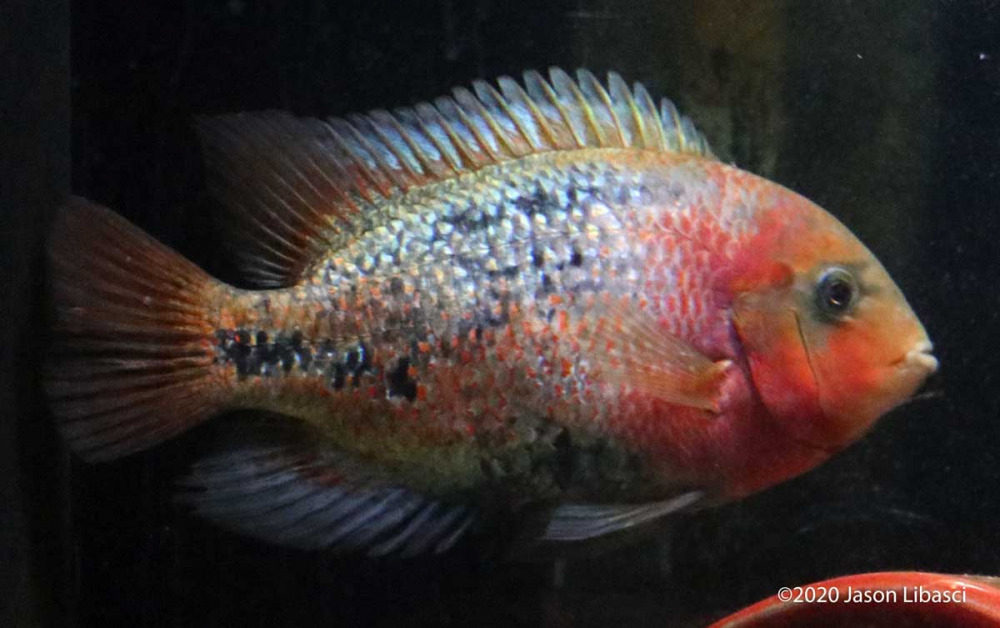 Vieja melanarum was first typed by Günther in 1862. Synonyms for this fish are Vieja synspilum, the quetzal cichlid, redhead cichlid or vieja cichlid.

It is believed that this fish is one of the foundational cichlids used to create the popular hybrid cichlid the Flowerhorn.

The two distinguishing features of the appearance of this fish are a red head, and spangling throughout the rest of the body. Males get a prominent nuchal hump that is common in many cichlid species. Depending upon the location variant the colors can vary considerably for the melanarum. The variant from Belize was previously known as Vieja synspilum and the variant from Guatemala and Mexico as the Melanura and these two genera were merged into one.

The species is a larger Central American cichlid that reaches a respectable size of 12 to 14 inches for the males and 9 to 10 inches for the females.
Vieja melanarum as juveniles appear rather plain in color with a single horizontal line going through their body, they will start to get the red head at about three to five inches but it is still pretty mild at this size.

When they mature, they are one of the most spectacularly colored cichlidae.

Vieja Melanura is found natively in Belize, Guatemala and Mexico and is known to have invasive hybrid populations in Florida, Puerto Rico and apparently a population was found in South Dakota however it did not establish itself. The fish lives in water that is from 76 to 88 degrees and can be found occasionally in slight brackish water.

“Recorded from Clearwater Creek, Belize River and Progresso Lagoon [in Belize]. Froese and Pauly 2017.” - This variant is believed to have the stronger red headed color.

“Restricted to the Rio Usumacinta basin [in Mexico].”

As these are larger Central American Cichlids which have a rather large life spawn, long term care would require a six-foot-long aquarium or larger. I was able to keep a group in a five-foot tank with 90% weekly water changes, but eventually had reduce the group down to two pairs to get them to spawn.

As mentioned previously I found the colors intensified greatly when keeping the temperature above 80 degrees. From my research in their native waters the temperature varies from 76 to 88 degrees. The variant that I owned was identified as the Belize variant by Rusty Wessel, when he came over my house for a quick visit when in town.

Vieja melanarum eat a variety of food and are Omnivorous in the wild. I fed my fish a variety of food such as NLS pellets, live worms, frozen food and my favorite Otohime pellets. They had a good appetite although were never massive over eats like an Oscar or some of the cichlids that will over stuff themselves. I also found that juvenile melanarum love to eat pond snails and one little juvie was able to eradicate most of the ramshorn snails that had taken over one of my 40 breeders.

Breeding Vieja melanarum was a decent challenge and was not accomplished as quickly as I thought. One of the challenges was I don’t have many big tanks, actually I only have one tank that is above 40 gallons and that is five-foot 120 gallon that is my show tank in the family room.

The journey to breed Vieja melanarum had started during my first observation of this fish at my close friend and fellow hobbyists house Mike Helford. During many visits to his fishroom, I was always in awe of the coloration of this fish. A year or so later the group that Mike Helford had for a couple of years, was passed on to Ric Perez who later spawned them outside in a tub if I am correct. The fish were just over three years old at the time of that spawning.

Ric Perez, a good friend and fellow GCCA hobbyist, brought me some 1 to 2 inch juvies to a GCCA meeting.

That would be begin a relative long journey, at least much longer than I had anticipated in my over confidence or arrogance. I had always heard that it should not be a problem to breed them at much big Central American cichlids at a much smaller size, which led me to the assumption I should be able to breed them when they were about one to one and half years old or about five to seven inches long.

Initially the fish were kept in a 10 gallon tank and then moved them to a 40 breeder. When they grew to about four or five inches and at about six to seven months of age, they were moved to my 120 gallon show tank, where I ended up with seven adult Vieja melanarum and was lucky enough to get three pairs plus an extra male.
The tank was filtered by a large wet/dry filter and received regular, 90% water changes. The substrate consisted of mystic white pool sand after the water leak and black silica sand substrate prior to the water leak.

At just over 1 year of age, I noticed the females eyes would glow yellow and the male would get in breeding dress and they would do lots of breeding behavior. This went on and off for months but never any eggs.

Well one morning my wife called me to come down to the living room first thing in the morning and guess what, still no eggs but I had a leaking aquarium.
After immediately emptying the tank the fish were tossed in a few tubs and brought over to Mike Helford’s house who housed them for few weeks or so for me.
After resealing the tank and getting it up and running, I brought back two pairs of the Synspilum and left Mike with the reverse trio.

These fish were now over 2 years of age, and still I had no luck with getting eggs or fry, I must have spent over $200 in different size flower pots for them.

The group was also very shy and did not like being around people so even when I had seven fish in the tank at over 8 inches the tank would sometimes look empty. They were not a what I would call a wet pet. After spawning they did become significantly less shy and much less timid.

At one point I tried to add some nice sized Columbia tetra’s as dithers in the tank, well after one week all seven were gone.

The aquarium was also home to three decent sized L91 Beacon plecos in the tank, that had been fixtures in my tank forever.

After a few times watching the cichlids spar with the Plecos , I decided to toss the plecos into another tank to make sure they were not preventing the Cichlids from breeding.

At one point, I had setup a earthworm culture and was feeding them earthworms every other day.

I tried skipping some water changes, skipping meals, extra meals and I would get tons of prespawning and dancing behavior but nothing when the temperature was above 80.

These fish were coming up on 2.5 years of age, the plecos were gone, the tank was down to two pairs, the water was super clean and the food was five stars and I still got nothing.

So, I decided to heat the tank up to 88 degrees and then unplug the heater in the morning one day and let the tank slowly cool down.

Now was it the age of the fish, or removing the plecos, the really warm water at 88 degrees or the unplugging of the heater, to be honest I am not sure.

The spawn occurred in a rather large pot that was turned on its side, the female had her glowing yellow eyes and was rather secretive about her eggs. I siphoned off some of the wigglers and distributed them between a external breeder box, a breeder box in the tank and a newly setup 2.5 gallon and left some with the parents (a lot more than I knew).

I was not sure how many were left with the parents but it turned out to be several hundred.

The pair fantastic parents and become very extraverted as parents and kept the second pair quarantined to their pot (they were also displaying spawning behavior). And proceeded to parade north of five hundred fry around the aquarium.

I quickly sold the second pair of Synspilum and really enjoyed watching these fish be parents for a number of weeks.

The fry were veracious eaters and were going through four tablespoons of food a day. One other item I learned about these fish during this experience is that the fry will feed off and pick at the parents. Which I know is common with Discus but when you have 600 fry eating off your side it can get dangerous for the parents very quickly. This required me to be quite diligent around feeding twice a day as the fry would attack the parents when hungry. With the parental behavior of both parents was very strong if I did not feed those fry the would start to swarm the parents and eat their slime coat and more. Six hundred or so three quarter inch fish with their parents was quite the site to see.

As they got bigger the fry attacking the parents kept getting stronger and stronger, so I called Ric Perez and told him to come get his grown up babies.
Over the next few months the fry were distributed to many other hobbists, Pete Durkin took a couple hundred and we ended up sending the last batch of juvies to Apet wholesaler.

Vieja melanarum are occasionally available at pet stores. Expect to pay $9-12 for 1.5" juveniles.

Vieja melanura are not that hard to find as it is bred commercially for resale however as it is a fish that requires a large tank and some dedication you will not be able to always find them.