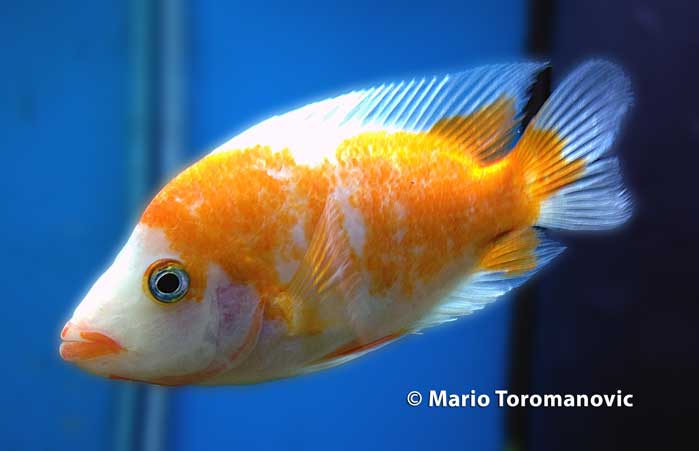 Above: Amphilophus sagittae. Photo by Mario Toromanovic.  Video available below.

In the cichlid hobby, there is a three main variants of Amphilophus sagittae. There is a black variant, a white variant (also known as xanthic) and third white-orange variant known as the “creamsicle”.

When born, fry of Amphilophus sagittae “creamsicle” have brown, wild-type coloration. At around three months of age, a yellow color begins to appear under the brown base. If I didn’t know about this color changing process, I would definitely think that something was wrong with the fish. Soon after, the yellow color dominated. Some of the fish developed white blotches, while rest of them turned to bright orange ( see video below ).

Amphilophus sagittae, is endemic to Lake Xiloa where it’s found in depths between 9 and 30 feet. It usually occurs right above the sand.

Amphilophus sagittae does not present many difficulties. Water temperature in their natural habitat of Lake Xiloa is between 75°F and 79°F, pH of about 7.0 and high hardness. It was very easy to mimic those parameters in my fishroom since my source tap water from Lake Michigan is similar. I performed weekly 30% water changes. The aquarist should note that Amphilophus sagittae, like other members of the genus, are large robust fish, so large tanks of preferably six feet in length are required.

Amphilophus sagittae is omnivorous. In the nature they feed on insects, crustaceans and small fish, but in my tank they were did  just fine on a diet of flake and pellet food, frozen Mysis and brine shrimp, with the occasional treat of live black worms.

Amphilophus sagittae is a cave spawner and it is not hard to breed. I obtained my breeding group of eight, 1.5 inch fry as a BAP bag at one of our club meetings, from fellow GCCA member Scott Womack. To start, I put them in 20 gallon tank, and as they grew I moved them to 40 gallon breeder tank, 75 gallon and finally to my 150 gallon show tank. All the fish got along fine, with very little aggression.

At around one year of age, two pairs formed, and after some mild tussling, they settled in opposite corners of the tank. Each pair took possession of a large breeding cave. A few weeks later, they spawned inside the cave. Females spend most of the time inside the cave, while the male hangs close by outside of the cave, making sure no other fish comes close. Once the fry were free swimming and out of the cave,  I began feeding live baby brine shrimp. Amphilophus sagittae are very good parents and both the male and female are very active in guarding the fry.

Amphilophus sagittae is inexpensive, but they are not readily available in the pet stores. With a bit of searching, you can probably find them in your local fish club or via the internet.  Two-inch fish typically retail for $5 to $7. Adult breeders may go for $20 to $30 each if they are in excellent condition.