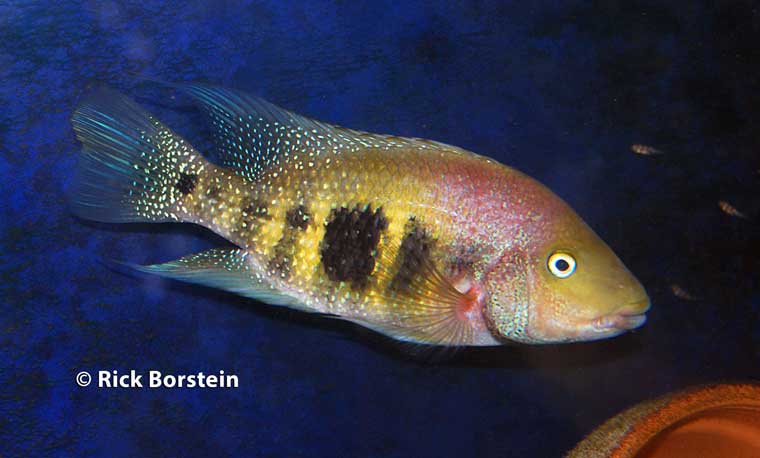 Above Astatheros nourissati Male, breeding color with fry. Below, Female with Fry. All photos and video by Rick Borstein.

Astatheros nourissati is a relatively new to the cichlid hobby having been typed by Allgayer in 1989. The species name is an honorific for French ichthyologist Jean Claude Nourissat.

Astatheros nourissati is a bi-parental, substrate-spawning Central American cichlid found in Mexico and Guatemala which forms strong pair bonds. According to cichlidae.com, this fish is "Distributed in the eastern affluents of the Rio Usumacinta system: Rio Usumacinta, Rio Salinas, Rio de la Pasión, Rio Lacantum and their affluents"

Males get up to 10 or 11 inches while females stay a couple of inches smaller. Males may have longer fin extensions and a more robust head profile. Despite their large size, Astatheros nourissati is not very aggressive and perhaps a bit shy in the aquarium at times.

Astatheros nourissati is a good-looking fish. The body is elongated. The overall color is a golden tan with darker markings and a red blush. The common name for this fish is the Bluemouth Cichlid and both males and females have a blue lower lip.

Astatheros nourissati is a riverine fish and is usually found where there is strong current.

Astatheros nourissati aren't difficult to care for, but you do need a large tank. I kept my fish in a 6-foot, 110G tank filtered by a large, external pond filter. Provide a sand substrate and tank temperatures of 75-80F. Provide some rockwork or terracotta pots.

Astatheros nourissati is a sand sifter and opportunistic predator. In the aquarium, this fish spends a lot sifting through the substrate. I fed a variety of prepared foods such as Tetra Cichlid Sticks, Xtreme Big Fella pellets, Dainichi Veggie Deluxe and New Life Spectrum pellets. You can feed both large and small pellets. The fish seem to enjoy sifting through the substrate to find smaller items.

I obtained ten Astatheros nourissati at one of GCCA's Rare Fish Auctions. The club had brought in quite a few Central American cichlids from breeder Don Conkel and my fish were descendants of fish collected in the Rio Chancala, Mexico. At the time I bought them in Fall, 2010, the fish were about two inches long. I placed them in a 110G tank for grow out and by Fall 2012 the fish were all over eight inches long with the larger males about 10-11 inches.

Although I perform regular water changes using an automatic system, I occasionally will do some serious maintenance and substrate cleaning which includes a very large 80% water change. I first noticed breeding behavior after a large water change in early October 2012.

As a bit of background, the tank was filtered by a large 1200 gph pump inside the aquarium which then runs to an external Tetra pond filter. I noticed a pair change color and the female stayed around the back of the pump. Unfortunately, I couldn't see exactly where the pair laid the eggs, but I believe the female laid the pump itself. As soon as I noticed this behavior, I placed a small nightlight above the tank. I find that this simulates moonlight and keeps the pair focused on guarding the eggs.

During breeding and the parental care period, the color of the male and female intensifies.The golden underlying color gets brighter and the bars on the fish increase in contrast.

On September 26, I noticed a huge cloud of fry in the tank. The large male had pinned the other eight fish in the opposite side of the tank. No real damage occurred to the other individuals, but there appeared to be a few scrapes among the outcasts. The female always stayed closely associated with the fry while the male patrolled the outskirts of their territory, immediately driving away any fish that approached the fry.

I siphoned out about 100 fry leaving at least that many for the pair to maintain. Interestingly, the fry are highly motile even on the first day of free-swimming. Fry of riverine cichlids are robust and are able to immediately eat baby brine shrimp.

As of this writing (October 13, 2012) the fry I left with the parents are about 5/8 inch long are still being vigorously defended by their parents. The fry I siphoned out are quite a bit smaller.

Astatheros nourissati is not typically found in a pet shop nor is it a particularly common fish. If found in a retail setting, I would expect to pay $15-20 for 2-inch juveniles.

Online, via aquabid.com and other breeders, you will occasionally find fry in the $5 to $8 range.