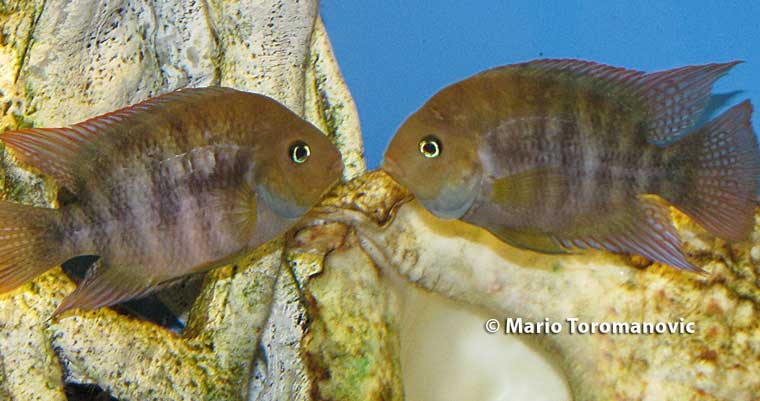 Cryptoheros sajica, formerly known as the Archocentrus sajica is a small Central American Cichlid found exclusively in the Pacific slopes of Costa Rica. Male specimens can grow up to a nearly 5 inches, while females are considerably smaller and fully grown at about 4 inches.

Cryptoheros sajica inhabits rivers which have moderate to strong currents, but prefer slow flowing water in a small water bodies, only few yards in width. They are found above gravel, as well as sandy bottoms.

Because of lack of tank space at the time I acquired these fish, I kept two pairs in twenty gallon tall tank. I would definitely recommend a bigger tank, at least 40 gallon. I maintained the temperature at 78°F, pH at 7.2 and performed up to 50% water change every 3 to 4 days. The tank was furnished with gravel, some caves, rocks and driftwood. Lights were on 12 to 14 hours a day.

These fish are not overly aggressive, so even though the tank was on the small side, aggression was limited and no fish were lost.

Stomach contents of wild fish indicate that Cryptoheros sajica feeds mostly on plant material. Beside filamentous algae and small seeds, water insects and small fish were also found. With this in mind, I fed a diet of flake and pellet food, frozen Mysis and brine shrimp, with the occasional treat of live black worms.

I obtained five young, 1-inch Cryptoheros sajica from one of GCCA's regular meeting auctions. I placed them in a ten gallon tank for a month or two and then transferred them to my 20 gallon tank. At about eight months old, they began pairing up, and I ended up with two pairs. The result was a pair of fish on each half of the tank and one extra female. There were some fights in the beginning, but once borders were established, fighting stopped, and soon after both pairs laid eggs. One pair chose a rock-like cave and other pair spawned in pleco bell.

T-bar cichlids are excellent parents. Both male and female actively guarded the fry for almost two months before I removed the fry to a separate tank.

Cryptoheros sajica isn't the easiest fish to find.  Occasionally you can see this fish listed in the ACA Trading Post, but seldom for sale on the web. Your best bet is to ask around at local clubs or on the internet.