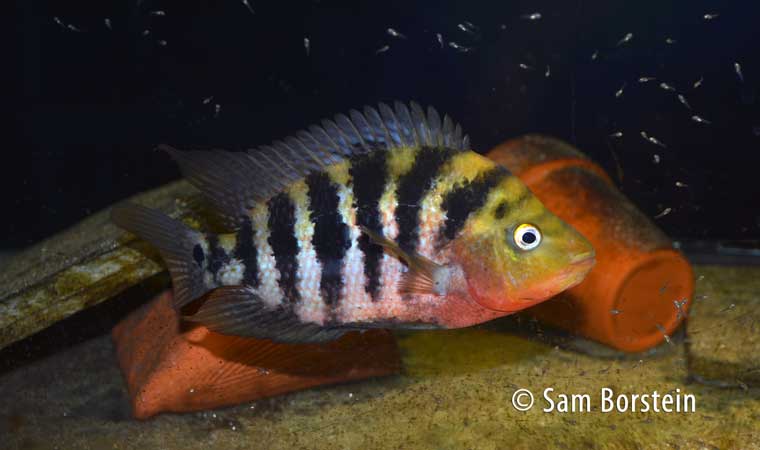 Amphilophus hogaboomorum is a large substrate-spawning Central American Cichlid native to Choluteca River Basin on the Pacific slope of the Honduras.  Common names for this fish are Guayas Cichlid and Harlequin Cichlid.

Like all members of Amphilophus, this fish gets big and can be aggressive, although less so than other members of the genus. Full grown males easily exceed a foot in length and females might be a couple of inches smaller.

In breeding color, they are similar to Amphilophus amarillo displaying distinct black stripes on a golden background. Both males and females may have red highlights. Non-breeding and juvenile individual display stripes, but have a more neutral tan or grey background.

Amphilophus hogaboomorum is found in rivers in both fresh and brackish water.

Amphilophus hogaboomorum isn't difficult to keep. If you are familiar with keeping large Central American Cichlids, you will be fine. Large tanks are obligatory (six feet long for a group of six to eight). Tank temperatures of 70 to 80 are fine and my fish did fine in hard, Chicago water. 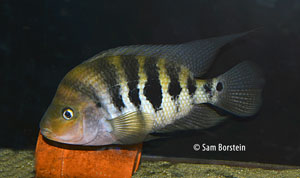 I obtained several Amphilophus hogaboomorum at the ACA Convention in Milwaukee, WI two years ago. The fish were F1 fry from individuals bred by Mo Devlin. The fish I bought were about 1 inch.

Over time, I moved the young fish to a variety of larger tanks as they grew out. At eighteen months, the largest individual was about 8 inches and the smallest about 5 inches. The fish were now in a 125 gallon tank and although I expected the fish to breed, no activity along these lines took place.

While visiting fellow GCCA Member Scott Womack, I saw his beautiful pair of Amphilophus hogaboomorum and he was nice enough to offer them to me. This pair was quite a bit bigger than my fish and I took them home and put them in to the 125. At first, the resident fish were very tough on the new pair, but eventually the tables were turned and the larger pair soon had the other fish pinned in a corner of the tank.

Breeding ensued shortly thereafter. A plaque of 200-300 pink-tank were laid on the side of terracotta pot. Four days later, the pair moved the wriggling fry inside the flowerpot they were free-swimming four days later.

I fed the babies newly hatched baby brine shrimp and they grew moderately fast. The pair spawned about once a month thereafter, sometimes on the side of a pot and sometimes on a flat rock. They are great parents it is a joy to see these fish raise their babies.

Amphilophus hogaboomorum is not a fish that you will find at your local pet store, but they are available on the internet for $6-8 for juvenile fish.