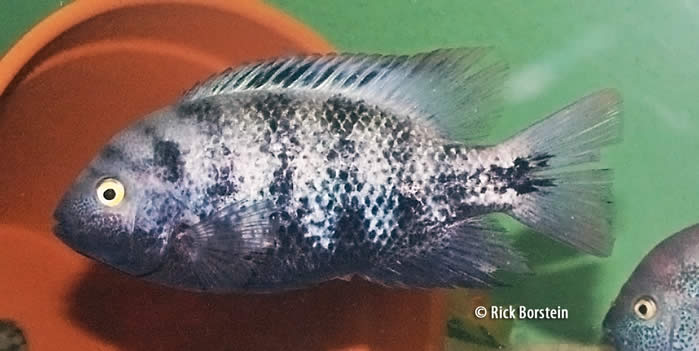 Above Vieja fenestratus. Photo of female in breeding color by Rick Borstein.

The barred appearance of the fish, sometimes divided by a horizontal stripe is the basis for both the scientific and common name. Fenestrta is latin for window and the window-like markings must have made an impression on Günther when he discovered the fish.

Vieja fenestratus is a large, robust and aggressive substrate-spawning cichlid from the southern reaches of Mexixo. Males may approach 16", so big tanks are a must. Females stay a bit smaller.

The orange form is not particularly attractive. They look rather like a syphilitic red devil to me . . .

These fish undergo profound color changes when breeding. When in normal coloration, both sexes exhibit a mottle gray flank with pink to red coloration on the head, breast and lower fins. When breeding, the dark striped window pattern becomes evident.

A common name for Vieja fenestratus is the Window Cichlid

According to Fishbase, Vieja fenestratus is found primarily in lakes or rivers with little water movement, often over sand or mud.

As mentioned previously, you need big tanks for these fish. I kept five individuals in 90 gallon tank. Regular partial water changes are obligatory with a big messy fish like Vieja fenestratus.

Vieja fenestratus is easy to feed. Mine ate a variety of prepared foods such as Tetra Cichlid Sticks and Dainichi ColorFX. In the wild, they are omnivorous, but stomach content analysis has found a preponderance of vegetable matter. For that reason, I do not recommend feeding a diet with heavy, meaty foods.

Vieja fenestratus isn't difficult to breed, at least for a large Cichlasoma. I had been very interested in this fish for years. The pictures I had seen of breeding adults were spectacular.

Ric Perez of the GCCA offered to organize a rare fish auction for the club of Central and South American cichlids. When he showed me the offerings available from Don Conkel's fish farm, I immediately asked him to bring in some Vieja fenestratus. I purchased two bags of 3-inch juveniles when they came up for auction and placed them into a 90-gallon tank when I returned home.

The tank was filtered by a large wet/dry filter and received regular, 50% water changes. I used a silica sand substrate and maintained the temperature at 78F. My water is typical Chicago water— 7.4pH and very hard.

The fish ate well and grew quickly in their new home. At six inches, I was able to discern pairing behavior. I added two large (8" diameter) terracotta flower pots and placed them on their sides in the tank.

Shortly thereafter, I observed the female cleaning a pot after a water change. The male patrolled the outskirts of the territory, driving the other tank inhabitants across the tank. The next day, I observed the female zealously guarding 300+ pink-tank eggs which she had laid on the floor (actually the side) of the flower pot.

The eggs hatched after five days and became "wrigglers". About five days after that (9 to 10 days post-spawn) the fry are free-swimming. At this point, the fry are able to take freshly hatched baby brine shrimp.

As often happens, the pair did not raise up their fry the first time, but eventually settled down and spawned every 3-4 weeks, avidly defending their fry.

In order to save some babies, I siphoned out 75 from the last spawn and raised the separately in a 10-gallon tank. I now have them in a 40-gallon breeder tank and expect them to be 1-1.5" and ready for sale at ACA 2006.

Vieja fenestratus is occasionally available at pet stores. Expect to pay $9-12 for 1.5" juveniles.

Vieja fenestratus isn't the easiest fish to find. There are a limited number of people who have the large tanks necessary to breed them. I occasionally see this fish listed in the ACA Trading Post, but seldom for sale on the web. Your best bet is to ask around at local clubs.