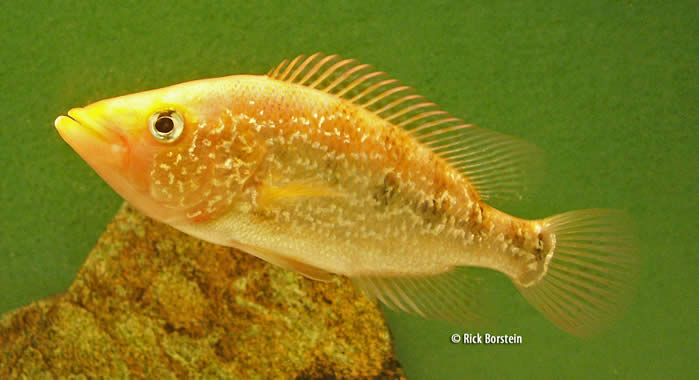 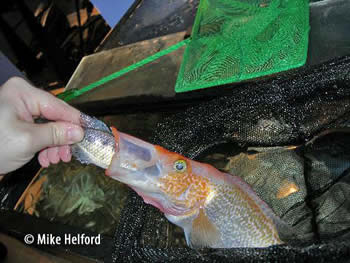 Petenia splendida is a large, laterally compressed basket-mouthed predator first typed by Günther in 1862. According to Fishbase, this Central American fish is found on the Atlantic slope of Grijalva River in Mexico, Guatemala and Belize. The genus name Petenia splendida derives from the that fact that the first specimens were found in the Lago Peten basin in Guatemala. Petenia splendida is found in rivers and lakes in slower moving water primarily over mud and sand.

Male Petenia splendida reach lengths up to 18 to 20". Females are smaller, topping out at just over a foot. You'll need at least a 75-gallon tank to keep this fish. Strangely, although this fish gets very large, it isn't particularly aggressive or capable of producing a lot of damage to other fish. The mouth anatomy is designed to create suction to inhale prey and is delicate compared to the robust jaws of other Central and South American cichlids.

Two color varieties of Petenia splendida are known Green, also called silver, and Red. The common name for the Green/Silver variety is Bay Snook. The red variety takes the moniker Red Bay Snook. Although both color varieties were known to the hobby for some time, many many cichlid keepers had questions concerning the red variety. What evolutionary advantage could a bright red fish have in a predator rich environment?

Speaking at the 2005 American Cichlid Assocation Convention, Albert Klee recounted his trip in the 1970's to White Water Lagoon in Belize where the mystery was finally solved. In the wild, the red variety of Petenia splendida are quite rare, but were almost always found under a variety of water lilies with bright red undersides. Thus, the red variety actually blended into the environment!

Like many other predators, Petenia splendida is an intelligent fish. The fish always eagerly greeted me when I came in to the room. They would eat right out of my hand, sticking their large snouts out of the water.

Fellow hobbyists can make a real impression when speaking of their favorite fish. Long time GCCA member, Del Calhoun, often speaks fondly of Petenia splendida and wrote an article about the fish in the March 1999 issue of GCCA's Cichlid Chatter >

At the 2004 ACA Convention in Denver, four three-inch Red Bay Snook came up in the silent auction. I won with a winning bid of $21 and they made the trip back to Chicago in fine shape. I placed the fish in a 90 gallon tank over a sand substrate. The tank was filtered by a Tidepool wet/dry filter and I performed regular partial water changes of 40–50% every week.

Petenia splendida can be difficult to sex, especially when small. I was very happy to see one individual grow quite a bit faster than the others. I was lucky to have one male and three females! When the male got up to about nine inches, he paired off with a 7" female. They cleaned a flat rock on one side of the tank and the female laid about 200 pink-tan eggs. The eggs wriggled after about three days and the fry were free-swiming at a week post spawn. I fed the babies newly hatched baby brine shrimp and they grew quickly.

My Petenia splendida were great parents. They kept the other fish at bay while raising the fry. I siphoned out the babies after a week and raised them separately. At two months, they were between 1/2" and 3/4" long.

This is not a fish you will often find at a retail pet shop. If you do find it, expect to pay $16-18 for a 3-inch specimen. Petenia splendida has lately become more available in the hobby. It can be found on several wholesalers lists on the web and I saw many specimens for sale at the 2005 ACA Convention.