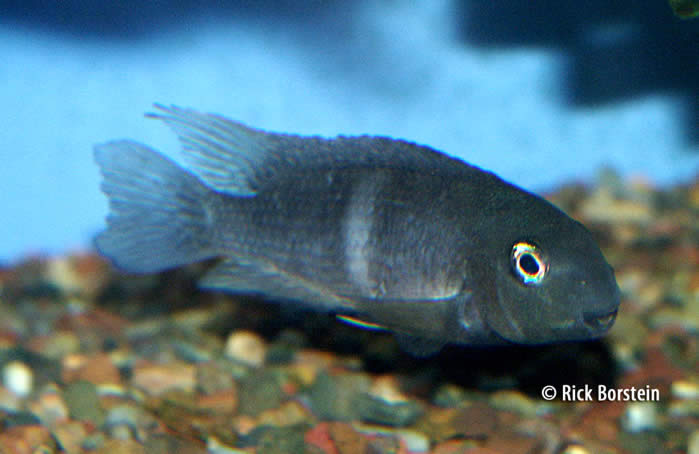 Above Neetroplus nematopus. Photo of female in breeding color by Rick Borstein.

The common name— Poor Man's Tropheus— is an apt description. In breeding dress, both male and female have a nice white band in the middle of a black or dark grey flank. The effect is reminscent of Tropheus duboisi. Indeed, the fish are much less expensive too!

Like Tropheus, they are quite aggressive . . . some would say extremely aggressive. Although males seldom become much larger than four inches, they have been known to harass and kill much larger fish. Females which top out at three inches may be even more aggressive at times, especially when defending fry.

GCCA members got to see this aggression at our July 2006 meeting during the presentation of Willem Heijns' DVD presentation on Lake Nicaragua. In the video, this tiny fish was driving away C. nicaraguense several times larger.

Despite the listed common name of "Poor Man's Tropheus", most folks just call them "Neets". They are a neat fish!

Normal, non-breeding coloration for Neetroplus nematopus is bronze with a dark brown or black stripe in the middle of the flank.

According to Fishbase, Neetroplus nematopus is found in both rivers and lakes in Central American, primarily Nicaragua, associated with rocks and sunken trees.

Neetroplus nematopus requires some special considerations due to aggression. A pair may be kept in tanks as small as a 20 gallon high, provided you add fast moving, tough target fish and adequate cover.

If you try to keep this fish with other bottom-dwelling fish, beware! An individual or pair generally consider the entire bottom of the tank as their territory.

Neetroplus nematopus has sharp, well-developed front teeth and is only too happy to use them.

A better set-up is a pair in a forty breeder along with several target fish.

Neetroplus nematopus is easy to feed, but should have a diet rich in vegetable matter. I fed Dainichi Veggie Deluxe, Tetra Cichlid Flakes, New Life Spectrum, HBH Soft & Moist and other foods with no problem.

Our first experience with this fish came via my 14-year-old son Sam. He obtained a breeding pair from fellow GCCA member Mike Garibaldi. Mike reported that the pair was a "terror" and wanted them out of his fishroom.

Sam placed the fish in a 20G Low and kept them for a couple months without success. This tank had a lot of hiding places and a sand bottom. The male pursued the female and she sustained a bit of damage, but looked OK.

At my urging, Sam added three adult M. lacustris rainbowfish. That seemed to do the trick. The pair quickly picked out a terracotta cave as a spawning site and managed to kill two of the rainbows and inflict a lot of damage on the remaining one. Aggression seems to be the basis of the pair bond, so use that to your advantage!

Sam found wrigglers a few days later. The babies are huge for Central Americans . . . almost the size of mouthbrooder fry. This spawn was about 30-35 fry. After wriggling for five days, the free-swimming fry hovered near the mouth of the cave and were immediately able to take baby brine shrimp.

The pair exhibited excellent parenting skills until about 3-4 weeks post spawn when the male beat up the female fairly well and took over the terracotta cave. Sam thought for sure the fry were gone too, but he counted 25 or so remaining. At this point, Sam was ready to give away the fish and score his BAP.

Sam traded me the "Neets" for some other cichlids. I placed the Neetroplus nematopus in a 40 breeder containing a flowerpot, PVC pipes, a gravel substrate and a few rocks. I also added the remaining M. lacustris rainbowfish and three standard Australian Rainbows. All of the targer fish were over 2.5" long.

In this tank, which was quite a bit taller, the rainbows did much better. The extra tank space allowed them to evade— just barely— the sudden attacks of the Neetroplus nematopus. Neets can put on a burst of speed that is dramatic and scary. Soon, all of the rainbows had nicks on the their tales.

In my own fishroom, I was able to observe the courting of Neetroplus nematopus much more closely.

After a water change, first the female and later the male reversed colors to the appearance in the picture above. The female performed nearly all of the pre-spawn cleaning duties, even driving away the male from the chosen flower pot breeding site.

I didn't observe the spawning, but counted about 45-50 tank-pink eggs. The female stayed immediately over the eggs and drove away the male. Apparently, his job was to protect the greater territory which he did with great vigor, regularly terrorizing the rainbows.

Again, the huge babies hatched out five days later and were immediately ablel to take brine shrimp. In the larger tank with more target fish, the pair guarded the fry and got along past the four week mark. At about five weeks, we removed the male to place him in the ACA 2006 show. The female continued to vigorously guard the fry past the six week mark. At this point, the fry are 3/4" long. They are bronze in color with a nice black marking mid-body.

Neetroplus nematopus is not a fish you would find at your typical retailer. I would guess that prices for juveniles would be in the $10-12 range. Neetroplus nematopus is primarily a fish for the advanced cichlid hobbyist, so you'll occasionally see them at GCCA cichlid auctions and swap meets in in the ACA's Trading Post publication.