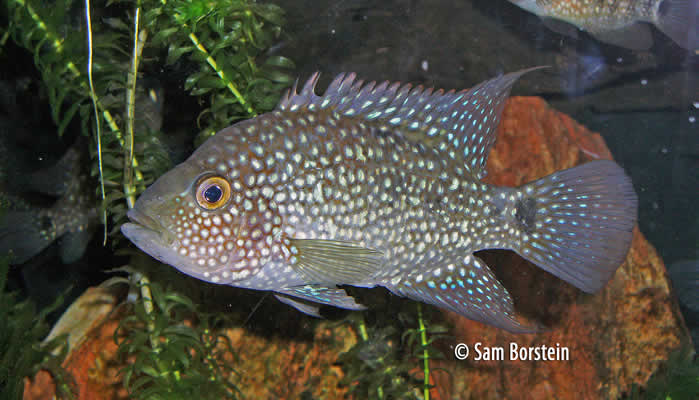 Hericthys carpintis was first typed in 1899 by Jordan, Star and Snyder. It is a robust, gregarious and aggressive substrate-spawning fish native to Mexico.

Note that although Hericthys carpintis is named the Texas Cichlid, most scientific references report Mexico as the collecting site.

Hericthys carpintis is similar to, Herichthys cyanoguttatum, the True Texas Cichlid. Generally speaking, Hericthys carpintis have larger spots. Some reports indicate that they do not grow as large. These two variants will interbreed, so keep these species separate.

Hericthys carpintis exhibits great parental care. Like all fish in the Hericthys genus, they change dramatically from their original color when breeding. Breeding dress is a rich-black black lower body and nearly white on the flanks.

Hericthys carpintis gets up to about 8" for males, with females a bit smaller. I have read reports indicating that they get up to a foot, but haven't seen one this large.

In the wild, Hericthys carpintis is found both in fast-flowing rivers and still water lakes and ponds. It is found in a variety of water conditions from neutral to hard and from temperate to hot. Thus, it is highly adaptable.

Big tanks are obligatory given the size and aggression of this fish. I kept two pairs in a 75 gallon. This fish does fine in Chicago's hard water. Regular partial water changes of 50% weekly are reccomended. Provide hiding places for sub-dominant individuals.

It will become obvious when a pair forms. You will witness increased aggression as the pair picks and defends a territory.

Hericthys carpintis will lay anywhere from 150 to 1,000 eggs, for a very large pair. Once the eggs are deposited, the pair will turn jet black with a white upper body. The eggs then hatch in about five days and are free swimming in eight.

These fish are great parents, so I left them with the fry and fed them newly hatched baby brine shrimp. I siphoned some babies out around one week post free-swimming and raised them in a 10-gallon tank.

Report May 2006 by Sam Borstein