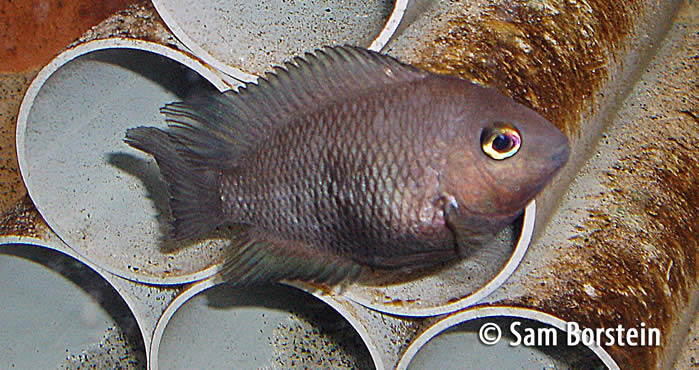 The Blue Eyed Cichlid— Cryptoheros spilurus— is a fun Central American to keep. Although not a big fish, they are pugnacious like other members of this genus. This fish, first typed by Gunther and Albert was originally found in Lago Izabel, has a relatively wide distribution in the wild, and in the hobby.

Cryptoheros spilurus is found in Belize, Honduras, Guatemala, and Mexico. This fish is usually found in Lakes throughout these regions.

Cryptoheros spilurus is an easy fish to keep. They are aggressive, and can dominate a tank, but can also be kept with a vast amount of other fish. I like keeping mine with larger Malawian Haps. The Haps seem to know when they need to stay away, and both fish tend to leave each other alone.

A problem that one encounters with this fish is the conspecific aggression. The fish can be rough on each other, but when a pair bond is formed, it is usually strong.

Cryptoheros spilurus is an omnivore, and will accept almost any food offered. This fish will get into breeding condition faster if offered bloodworms.

The Blue Eyed Cichlid is easy to breed. The main trouble I encountered with this fish is the male wanting to spawn before the female was ready. The females take a while to get into breeding condition. My fish had tubes down for about a week before they spawned.

The pair defend the eggs with no problem. The fry, which can range in numbers from 100-500 are small, and well defended. The fry are easily raised on baby brine shrimp.

Expect to pay $5 to $9 for juveniles at the pet shop. Availability of this species is good.