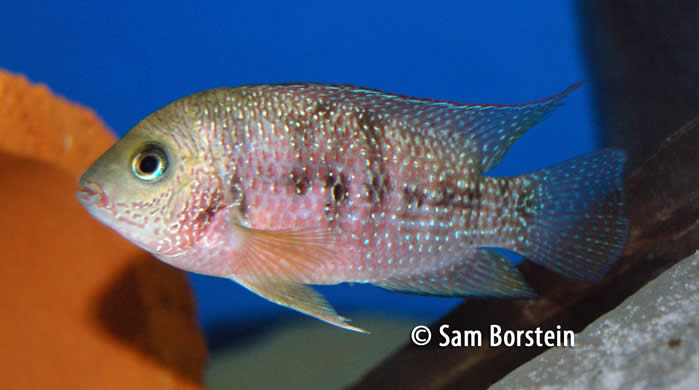 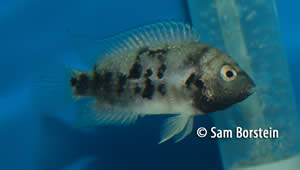 Cryptoheros panamensis is a pretty, small growing Central American cichlid, endemic to Panama. This fish, typed by Meek and Hildebrand in 1913 is not the most popular member of Cryptoheros genus, but is definitely one of the more colorful and aggressive.

This fish has been thrown around when it comes to phylogenetics. It was thought to be a member on Neetroplus for a while, but after looking at teeth and jaw structure, it was moved to Archocentrus, and then to Cryptoheros. It remains in Cryptoheros even after the recent Schmitter-Soto (PDF) paper, but is now in a monotypic sub-genus.

Cryptoheros panamensis is only found in Panama. According to Fishbase, this species

Inhabits moderately flowing water over a substrate of small stones, sand, rocks, and leaf debris from the forest canopy.

Cryptoheros panamensis is an easy fish to keep. They are extremely aggressive for a member of their genus, so a large tank is needed. Cryptoheros panamensis seems to be only very aggressive within its own species, but will go after other fish. If you want to keep them with something, look for a fast fish that can take a beating. Aggression between individuals, especially males is extreme, and they will eventually whittle down to a pair. I've heard males can be rough on females. This was not my experience.

Cryptoheros panamensis is a hearty fish, and really needs no special treatment. They do great if you can do water changes once a week— their color will show more, and in my experience, be more likely to spawn.

Cryptoheros panamensis is an omnivore, and will accept almost any food offered.

Cryptoheros panamensis is easy to breed. They will breed young and small, my female was about an inch, my male 1.5 inches when they first bred. These fish— once started, won't stop. If I pulled eggs or fry, my pair would spawn again within ten days.

Before spawning, the female changes color drastically. In place of a mottled red color, they turn a mottled black and white. The change reminded me of both Neetroplus neematopus, and Hericthys carpintis.

Cryptoheros panamensis are great parents. Of course, like most other cichlids, the first spawn may fail, which was my case, but after that, they were marvelous parents.

Like many Central Americans, the female stays over and fans the spawn, while the male defends the territory. In Cryptoheros panamensis , my experience was that the female did all the work. She is relentless towards any other fish, even the male. She had all the other fish in a three-foot tank pinned in the corners, except for the male, who was on the other side. Once free swimming, the female allowed the male into the male in the territory. Together they raised the fry for about one month until I removed them.

Fry are easy to raise, and grow quickly. They do great at first on baby brine shrimp, and then on crushed flake.

Cryptoheros panamensis are seldom available at pet shops. However, you will find them available from cichlid hobbyists and various lists on the web.