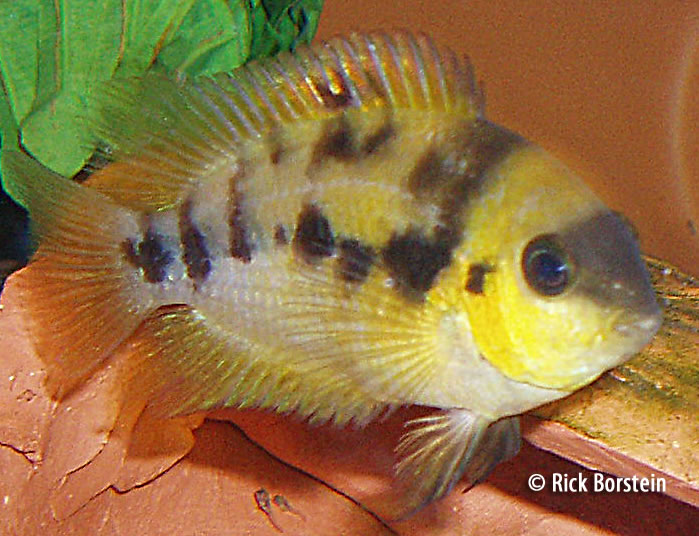 Above Archocentrus nanoluteus. Photo of female in breeding color by Rick Borstein. Note fry below. 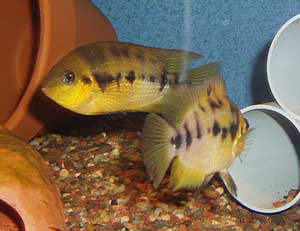 Archocentrus nanoluteus is a rather recent introduction, first identifed by Allgayer in 1994. This Central American cichlid is related to other members of the Archocentrus genus such as the popular Convict Cichlid. This fish is found on the Atlantic side of the continent in the Guarumo River basin. Synonyms for this fish are Cyptoheros nanoluteus and it is also sometimes confused with Cryptoheros altoflavus. An article on the Cichlid Room Companion sheds some light on this.

I first saw pictures of this fish in 2002. The bright yellow spawning coloration was very attractive and I was determined to get some. I've taken to calling this fish "banananluteus" in reference to the bright yellow color. So, I'm proposing a common name of "Banana Convict". What do you think?

Update August 2011: I've seen this fish referred to as the Banana Convict, so I think I started the trend!

Archocentrus nanoluteus is usually found associated with the bottom of rivers and streams.

Archocentrus nanoluteus presents no problems. I kept seven full-grown individuals in a 40 gallon breeder. The temperature was 78F and my water is very hard. Regular partial water changes are important, especially for growing fry. I did 50% weekly.

Archocentrus nanoluteus is easy to feed. My fish ate a variety of foods including HBH Graze, New Life Spectrum, Dainichi ColorFX and other foods.

I obtained two batches of fry. One batch was given to me and my son Sam by legendary "Babe in the Cichlid Hobby" Pam Chin at the 2005 ACA Convention in Fort Worth, TX. Unfortunately, only three of the tiny babies survived the trip back home to Chicago. I later acquired a few more babies at a GCCA Swap Meet.

Initially, I grew up the Archocentrus nanoluteus in a ten-gallon tank. They grew slowly but steadily and in about six months were just over 1.5".

Since the fish were getting way too big for a 10G tank, I moved the fish to a 40G breeder. This tank had a fine gravel bottom, some PVC "Cichlid Condos", two clay pots and a few artificial plants. Filtration was by two ATI sponge filters. I added three Australian Rainbowfish as dither fish.