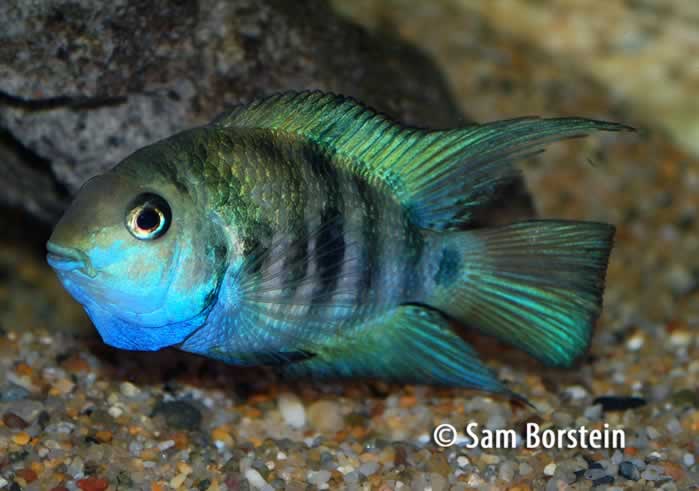 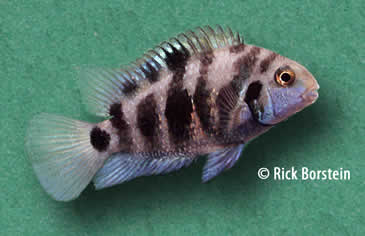 Both males and females sport similar coloration— a pattern of vertical bars/blotches with metalic green-blue coloration along the face and bottom of the fish. Depending on the mood of the fish, the coloration extends into the fins. Males are a bit bigger than females and are not quite as colorful. We have read reports that females get red or gold on the belly, but haven't seen it personally. Juveniles do not have the metallic coloration mentioned previously.

When first brought into the U.S., many cichlid hobbyists assumed this fish was a color variant of the familiar Convict Cichlid, a long-time staple in the cichlid hobby.

After keeping this fish, we feel differently. My son Sam Borstein, in his article in the March 2005 Cichlid Chatter, made a strong case that Archocentrus sp. "Honduran Red Point" is not the same as the Convict— Archocentrus nigrofasciatum

Since originally posting this article, other hobbyists have written to say that their red points were fairly aggressive (Frank Wozny, personal communication). Some pictures on the internet said to be Red Points, looked very different than the fish we reviewed here. We wonder if some Red Points have been crossed with Convicts.

Do not mix Archocentrus sp. "Honduran Red Point" with Convicts or any other Archocentrus or Cryptoheros species as they may hybridize

Archocentrus sp. "Honduran Red Point" was collected in a stream in Honduras. That's all we know…

Archocentrus sp. "Honduran Red Point" is easy to keep. We did weekly partial water changes equal to fifty percent of the tank volume.

This somewhat shy fish does best when provided with rockworks and caves.

Stomach content analysis— to our knowledge— has not been done on wild fish. Our guess is that they are omnivorous and consume a variety of insects and other matter. In the aquarium, they accept a variety of foods such as Tetra Cichlid Flakes, New Life Spectrum, and HBH Graze.

I obtained five juvenlie Archocentrus sp. "Honduran Red Point" from fellow hobbyist Eric Hanneman at the 2004 Cichlid Classic. Eric received his fish from Rusty Wessel. They were already a few generations from wild, but were still relatively rare in the hobby at that point.

I placed the fish fish in a 20-gallon high tank furnished with fine gravel, slates, caves and other rockwork. The fish were quite shy at first and rarely came out from their hiding places.

At just over two inches in size, I noticed a female with a swollen belly. Another fish— the male— was keeping close by the female. Shortly thereafter, both fish drove the rest of the fish to the upper corners of the tank clearly establishing a territory. The next day, we noticed two changes which indicated that spawning was imminent

The pair bred on the back of an inclined piece of slate. We have also had them breed on the inside roof of a clay pot. There are other reports on the web that they breed on flat surfaces, so "your mileage may vary".

Spawns are between 30 and 50 eggs and the fry were free-swimming about a week later. I immediately fed the fry baby brine shrimp and they grew quickly. The fish are good parents. I left the fry with the parents for about two weeks before giving the fish to a friend.

To date, not seen at retail, but expect that they would go for $8-12 for juveniles if available.

Archocentrus sp. "Honduran Red Point" is available in the hobby and can be found occasionally on wholesalers lists or on Aquabid. If you are local, your best bet is to post a free Wanted ad on GCCA's Cichlid Classifieds or attend a GCCA auction of swap meet.