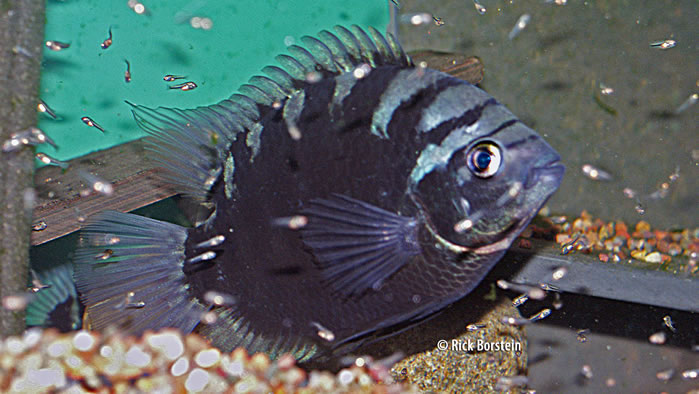 Above A female Archocentrus centrarchus in breeding dress with fry. Photo by Rick Borstein.
Below: Photo of a male, normal coloration, taken at the 2007 ACA Convention. Photo by Sam Borstein.

Archocentrus centrarchus is an attractive, barred cichlid native to Central America first typed by Gill and Bransford way back in 1877. According to Fishbase, it is found in "tributaries of Fonseca Gulf in Honduras and Nicaragua; Atlantic slope in the San Juan River basin, including Lakes Managua, Nicaragua, Jiloá and Apoyo". Thus, it appears to be fairly widely distributed.

Male Archocentrus centrarchus get up to about 5 to 6 inches, females are smaller at about 4 inches maximum. Males have somewhat longer extensions to the dorsal fin.

Normally, this fish has a greenish-brown undercolor with some speckling or striping, although I have seen pictures on the web with more colorful specimens. When breeding, the color changes significantly. Reportedly, it takes a while for color to develop on this fish.

Archocentrus centrarchus is not seen frequently in the hobby. It is no more difficult to breed than Cichlasoma nigrofasciatum, the common Convict Cichlid, and it doesn't get much bigger. It is not demanding of water quality and pairs form strong bonds, so it deserves a place in your tank.

The common name "Flier Cichlid" appears to derive from the fact that it bears a resemblance to a freshwater sunfish sometimes called the Flier.

Archocentrus centrarchus is found mostly in shallow water environments such as ditches and shallow ponds, even in conditions of reduced oxygen.

Archocentrus centrarchus is easy to keep. Although these fish are not demanding of water quality, I still suggest that you conduct regular partial water changes. These fish do not like a lot of current, so don't keep them in tanks with power fitlers or powerheads that move a lot of water. Maintain the temperature between 74 and 82F. Larger specimens should be housed in a 20-gallon or larger tank. I kept my pair in a 15 and they appeared a bit crowded.

I purchased a pair of Archocentrus centrarchus from fellow GCCA member Peter Ziolkowski at GCCA's May meeting. When I returned home, I placed the pair in a 15-gallon tank that included numerous slates and tiles. Filtration was provided by an ATI sponge filter.

Within a week, I noticed that the appearance of breeding tubes and the color pattern of the fish changed significantly. I had seen this behavior before, most notably with Herotilapia multispinosa, so I knew that breeding was pending. Indeed, the next day I saw the pair digging and later cleaning a clay tile that I had placed on an angle against one side of the aquarium. Shortly thereafter, the pair laid about 300 pink eggs that were extremely difficult to see on the red clay tile.

At three days post-spawn, the eggs hatched and the female moved the wrigglers to pit that had been excavated in the gravel. At this point, the mass of fry looked like a ball of mulm… good camouflage!

Seven days after the eggs were laid, the fry were free-swimming. A cloud of 250 (reports of 300 to 500 in a spawn) fry hovered around the parents. Parental behavior for this fish is outstanding. The fry stay closest to the female, who occasionally will take up an errant fry and "spit" it back into the group. The male was far from inactive— he patrolled the outskirts of the territory and corralled the fry as well.

Reportedly, fry in the wild feed on the mucous membrane of the parents, a behavior that is often associated with discus and uara. I did not observe this in my tank.

I fed the fry with newly hatched baby brine shrimp which they ate immediately. The fry are tiny, so crushed flake food is not going to cut it. The fry also at some Cyclops-eeze, but seemed to prefer the live food.

At one week, the fry roughly doubled in size and were swimming robustly. At this point, I removed the parents and gave them to another GCCA member. This decision was driven by two concerns.

You will rarely find this fish in pet stores. Expect to pay $6-10 for juvenile fish. Archocentrus centrarchus is not widely available.