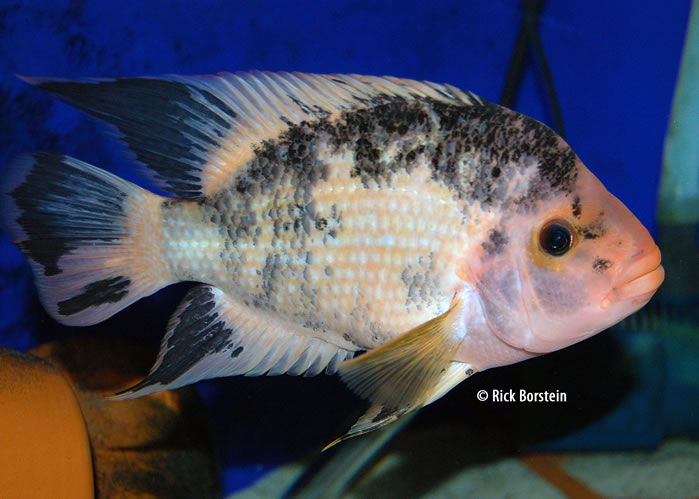 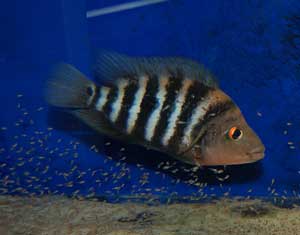 Amphilophus labiatus and Amphilophus citrinellus are found sympatrically in Lake Nicaragua and in a number of same color combinations (Grey, white, yellow, orange, and tan) and patterns including the marbled pattern above.

The species name labiatus means "thick lipped". It would be convenient if you could tell these species apart by looking at the lips, but that simply isn't a a reliable determinant

It's not easy. Telling these two fish apart is difficult, and probably not even possible in juveniles.

Seen from above, C. labiatum has a more pointed snout whereas C. citrinellum has a a more blunt snout.

The serious hobbyist should endeavor to understand the provenance of his fish. At the 2006 ACA Convention, a single wild fish sold for over $300. Because of the likelihood of mixed genetics in the retail and hobby channel, there may be no other way to be sure than to buy wild fish.

Although native to Nicaragua, feral populations of this fish have been discovered in the states of Hawaii and Florida in the United States. It is a hardy adaptable fish that gets quite large. Foot long males are not unusual. Females are generally about 25% smaller.

Amphilophus labiatus can be difficult to "pair up", but successful pairs generally are excellent parents and will raise the fry for up to eight weeks.

Amphilophus labiatus has a powerful jaw structure and wild fish (and some domestic individuals) sport extended, fleshy lips. Aggressive males can take on just about any other fish of similar size, so only keep it with other large, aggressive tankmates.

Amphilophus labiatus is found closely associated with the bottom of Lake Nicaragua and only occasionally enters nearby streams.

Amphilophus labiatus isn't hard to keep, but this large messy fish necessitates frequent water changes to maintain water quality. Large tanks are a must. I recommend a minimum of a 75-gallon tank.

In the wild, Amphilophus labiatus eats snails, insects, and other fish. In the aquarium, they readily take a variety of prepared foods. I fed Tetra Cichlid Sticks, Daninichi pellets, Spectrum and the occasional treat of frozen bloodworms

My son Sam obtained a trio of F1 Amphilophus labiatus from fellow GCCA member Mike Garibaldi who had purchased the fish as offspring from wild-caught adults. The fish bred for Sam in short shrift and he passed the pair on to me.

I placed the trio in a 110G tank and initially it appeared that I would be able to duplicate my son's success. This tank had a sand bottom and was filtered by a large external pond filter. I maintained the tank temperature at 78F.

As often happens with large Central American cichlids, the pair bond can dissipate quickly and havoc can ensue. The randy male killed the sub-dominant female and severely roughed up his mate. I removed the female to a another tank for about a month to recover, fattening her up on twice daily feedings.

I placed a tank divider in the tank and reintroduced the female. I also added a large albino Red Zebra, a great target fish who was savvy enough to have survive six months in a forty breeder with Parachromis managuense, but I digress . . .

Within 24-hours, breeding tubes were visible on both fish. Although I had laid a flat slate under the divider, breeding did not ensue. Still, I was wary to remove the divider.

My fishroom is fitted with an automatic water changing system. A port high up on the tank diverts incoming water to a drain. During a water change, the port became clogged and the water rose above the divider. The male swam over to the female's side of the tank. The pair seemed to get along and tubes were down. I took a chance and the fish spawned on a small rock the next day.

Both the male and female Amphilophus labiatus aggressively guarded the eggs. In about seven days, I had a swarm of at least 400 fry. I immediately began feeding freshly hatched baby brine shrimp. The fry were about 3/8-inch long at two weeks and we also observed the babies feeding off the sides of the female.

At this point, I removed both fish and moved them on to another Central American cichlid fan in the GCCA, Scott Womack.

True, documented F1 or wild Amphilophus labiatus are not that easy to find. Your best bet is to watch GCCA's Classifieds or peruse the internet. You aren't likely to find the right fish in a pet shop.