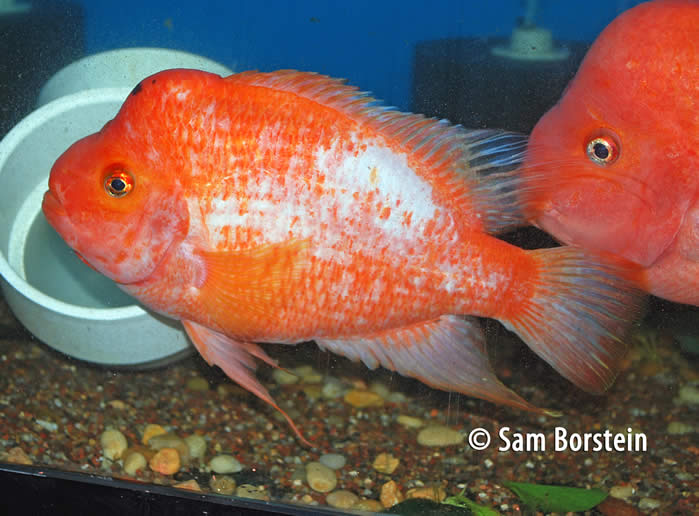 First typed by Günther in 1864, this fish is an enduring favorite in the hobby because of their outstanding color, intelligence and strong parental care. These fish are often kept as pets for many years by their owners.

There are many documented cases of pet owners training these fish to do tricks (!). I have seen video of a Midas Cichlid who would hit a ping pong ball into a tiny basket for a reward. Studies have also shown that this fish can differentiate color. It is impossible to say how intelligent this fish might be, but I have spoken to some hobbyists who feel they are every bit as smart as a dog.

Several color variants are available. The wild variety has six brown-black bars and a large black blotch on their side. The most common color morph in the hobby is a creamy yellow to orange fish, similar to above, that may or may not exhibit blotches on the side. Surprisingly, the yellow variety is also found in the wild. This fish has been extensively line bred for color. I have seen individuals that were nearly pure white, to bright yellow, to solid orange.

Amphilophus citrinellum gets very large! Males will often exceed a foot, so a big tank is in order!

Midas Cichlids are aggressive and territorial, particularly when breeding. I have read and heard many accounts of agression leading to death, broken heaters, etc., so be forewarned. This fish is a "tank buster" so either keep several individuals together or with similarly sized aggressive cichlids.

Amphilophus citrinellum is native to lakes in Central America, especially the Atlantic side of Lake Nicaragua. Midas are effective competitors in their native habitat and are generally found around cover such as tree roots and rocky outcroppings at depths of 1M to 35M.

Amphilophus citrinellum is easy to keep, but you will need a big tank. I housed and bred several 6 to 8 inch individuals in a 125 gallon tank. Midas Cichlids are also a good choice for ponds. Make sure to bring them in if the water temperature in your area dips below 68F. They handle the hard water here in the Chicago area very well.

Midas Cichlids are fairly messy fish, so regular partial water changes are critical. I change 50% of the aquarium volume per week.

Amphilophus citrinellum are voracious eaters. When young, they need a lot of protein their diet to grow well. Older fish, consume all matter of pellets containing both animal and vegetable products. I fed Tetra Cichlid Sticks and Tetra Variety Wafers.Midas Cichlids also appreciate occassional live food. I fed earthworms and excess cichlid fry which they hunt down happily.

Breeding this fish is one of the true pleasures of the cichlid hobby. Parental care is simply outstanding and fun to watch.

Males are larger than females and develop a nuchal (head) hump at about 6 inches.

I obtained seven young, 1-inch fish from one of GCCA's regular meeting auctions. I placed them in a 40 gallon tank for a month or two and then transferred them to my 300 gallon garden pond for the Summer 2002. Over the summer, they grew an inch or so and I moved them back inside to the 40 gallon tank where they grew to about 5 inches in length. They went back in the pond for Summer 2003. When I netted them out in September 2003 they were about an inch longer with spectacular color!

I placed all seven individuals in a 125 gallon tank and the largest, most aggressive pair bred within two weeks.

Pair formation is obvious and a pleasure to watch, but watch closely as they may damage tankmates severely. Spawning pairs stick closely together. You may see them move mounds of gravel and clean a spawning site. The male will become very agressive at this time.

The breeding pair may establish a very large territory . . . perhaps the entire tank!

When you see the females ovipositor descend, breeding is imminent.

My pair laid about 200 eggs on the inside of a 6-inch flower pot. The female stayed close to the eggs for about six days, occassionally picking off an infertile egg. The male guarded the perimeter.

Once the pink eggs hatch, the female moved them to one or more pits dug in the sand. The fry became free swimming about 4 to 5 days later. I fed the tiny fry immediately with freshly hatched baby brine shrimp. They grow surprisingly fast, tripling in size the first week.

As of this writing, I have two pairs spawning in my 125 and two other fish have paired off, too. I am not sure what will happen next, but I'm going to net out some of the babies for BAP and I'll worry about it after that!

Amphilophus citrinellum is inexpensive. 2-inch fish typically retail for $5 to $7. Adult breeders, if you can find them, may go for $20 to $30 each if they are in excellent condition. Amphilophus citrinellum is easy to find at pet stores. However, it is believe that most pet store fish may have been crossed with Amphilophus labiatus, the Red Devil. The two fish are very similar and extremely difficult to tell apart.