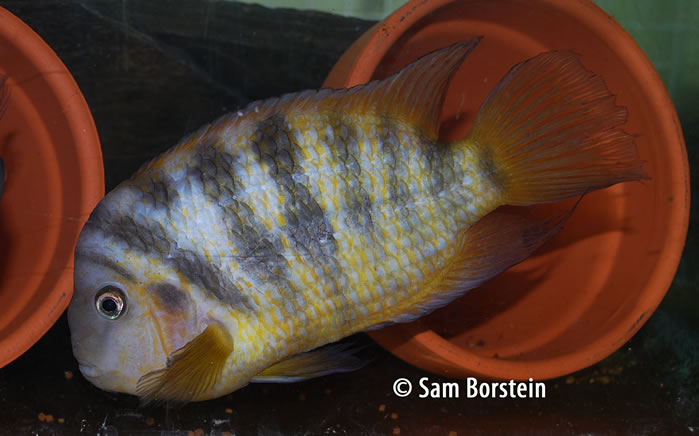 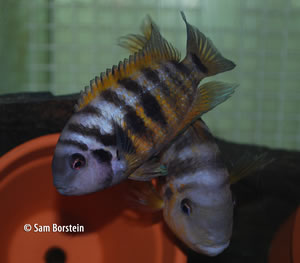 Amatitliana siquia is a beautiful Convict type that is relatively new to the hobby. This fish was described in the Archocentrus revision by Schmitter-Soto in 2001. This Convict type has the largest range of all the types and occurs in Central America from Honduras to Costa Rica and is very similar to Amatitlania nigrofasciatus, the Convict Cichlid, which is an aquarium classic.

Amatitlania siquia is is a highly variable species throughout its range. Males can range from a plain gray fish to having lots of yellow or blue on the body. Females are also quite variable and have the typical colored belly of Convict Cichlids. Depending on the origin of the fish, this can range from an orange, yellow, and gold. The max size of this fish ranges from 3-5 inches for females and 4-7 inches for males depending on the origins of the fish.

There seems to be some confusion in the hobby on whether or not the Honduran Red Point (Amatitlania sp. “honduran red point”) is the same as Amatitlania siquia. It is not, and remains an undescribed species.

There has been much debate about this fish and where it stands taxonomically speaking. Allgayer in 2001 created the genera Cryptoheros, with the type being Cryptoheros spilurus. This description was poorly done. Schmitter-Soto published a paper that came out in 2007,  where Convicts were given their own genus, Amatitlania, composed of the four species and one undescribed species. Off the bat, the genus Amatitlania was rejected by many scientists, but hobbyists seemed to readily use it. Although there may be more than one species of Convict, the descriptions for the three new species are in doubt and I believe another revision of this group of fish is needed.

The four species described in Schmitter-Soto's paper are:

Although I doubt these represent valid species and believe that the Convict Cichlids are just one diverse species, many hobbyists have sucked up these names and use them at present. In the long run, this may be desirable as Convict Cichlids are quite diverse in coloration throughout their large range and because they may or may not represent different species. They are different enough that one should never keep more than one location of Convict Cichlid in their aquarium for fear of hybridization.

These new names are useful as hobbyists have been paying much more attention to where these fish are from and some new location variants of this species have since made it to the hobby.

Amatitlania siquia is widely distributed through Central America and ranges from Honduras to Costa Rica. This species is found in lakes and rivers throughout its distribution. In rivers, the fish seek out areas with moderate to low flow with sandy, muddy, or silty bottoms. One of the reasons for this is that Amatitlania siquia shares its habitat with other Cryptoheros species, which tend to inhabit the faster flowing parts of the river.

Amatitlania siquia presents few issues. It is a very hardy species and will do fine in hard alkaline water. This species is tolerant of varying water temperatures and I’ve observed fish in the wild in water from 70-82F, although they are by far most active in water in the middle of this range.  Like other Convict Cichlids, Amatitlania siquia is aggressive and the tank should be decorated with plenty of hiding spots for the fish. A group could easily be kept in a 40 breeder. Pairs of this species generally form good pair bonds and I’ve been successful keeping pairs in twenty gallon tanks. This fish mixes well with most other Central American Cichlids of similar size and demeanor and makes a good dither fish and even a target fish for many Mesoamerican Cichlids.

Convict Cichlid types are ultimate opportunistic feeders and Amatitlania siquia is no exception.

In the wild I’ve seen this species pick at algae, rob nest of eggs, flip leaves for insect larvae, and even hunt small fish. Feeding in captivity is easy for this species and almost any flake or pellet food will be accepted. I personally like using New Life Spectrum foods periodically for this species as it seems to bring out fantastic color on females. A mix of veggie and standard flakes and pellets will be perfect for this fish.

Breeding Amatitlania siquia is easy to do. It’s like breeding any other Convict type Cichlid.

On a quick side note, if you’ve never bred a Convict Cichlid type you should. It is a fish that any true Cichlid fan should spawn just once to see the fascinating parental behavior. No, you’re not too cool to keep and breed this fish! It’s a fantastic sight to see these fish go crazy defending their young.

Amatitlania siquia, like other Convict Cichlid types is a cave spawner. I’ve had success giving these fish terra cotta caves as well as some slate piled on rocks as a nesting site. Larger pairs usually aren’t as picky and will gladly spawn in a flower pot.

Amatitlania siquia becomes sexually mature at about two inches.. Depending on the size and age of the female, spawns can be anywhere from 50-450 eggs. Larger spawns occur from larger older females. The eggs are small to mid-size compared to other Central American Cichlids. Typically, these hatch in around two-three days depending on water temperature. The larvae wriggle for around another 4-5 days, after which the fry become free swimming. The fry, although tiny, are easy to feed on either crushed flake or baby brine shrimp.

Fry are guarded fiercely by both parents, who will take a whack at any intruder that ventures into their territory. This includes humans. I have a large 7 inch male that will nail my hand and arm whenever I’m doing tank maintenance on his tank when he has fry. When a 7 inch chunky Convict Cichlid comes rushing at you with a head of steam, he can leave a mark. He’s occasionally drawn blood.

The fry are easy to raise. I find it easiest to raise the fry with the parents. The wild pair in my tank has raised fry for four months! Although I don’t recommend leaving fry in with the parents for this long, it is safe to let the parents raise them for the first 4-6 months.

Amatitlania siquia has some interesting parental behavior in the wild. One of these is “fin digging”. One of the parents will use its fins and body to dive into the sediment and stir up food for the babies. Another interesting behavior is leaf turning. Parent Amatitlania siquia will turn over leafs in the river allowing their fry to eat the microorganisms growing on the bottoms of the leaves. This interesting behavior can be witnessed in the aquarium by cutting the leafs off of artificial plants that can be purchased at a craft store or aquarium store and placing them at the bottom of an aquarium. When the fry are free swimming, they will follow their parents and when mom or dad flips the artificial leaf, rush in for a meal. These behaviors are also documented in other Convict Cichlid types as well as Cryptoheros species.

Amatitlania siquia is not available at pet shops and would only be found from specialty Cichlid breeders. Some localities of this species are readily available in the hobby while others are periodically collected on trips by hobbyists. Prices vary depending on the origin of the fish as some races are more desirable than others. Typically a bag of five fry will run you about $10. Pairs can usually be purchased for around $20-$25 dollars.