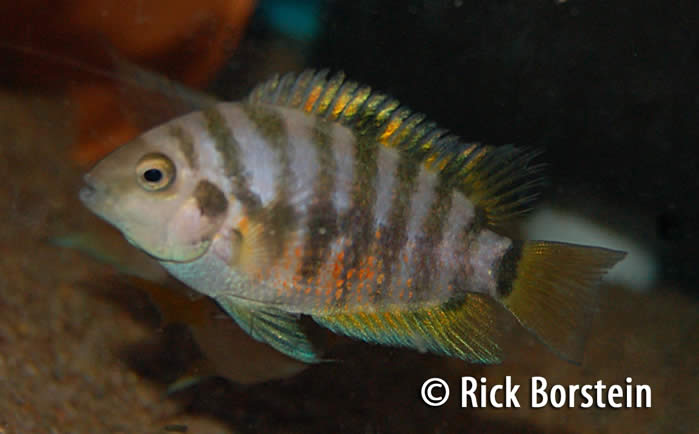 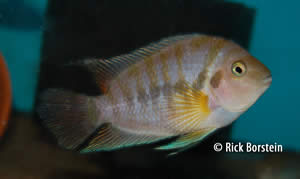 So, I know what you're thinking . . . that looks a lot like a Convict Cichlid.

It might be and until scientists figure it out, I'll report this fish under the name in which I received it.

Still, as a cichlid hobbyist, I am very interested in geographic variants of popular cichlids. My experience is that oftentimes both physical and behavioral differences are present.

As responsible hobbyists, it is important to keep location variants separate, so you should never keep this fish with standard Convicts or other Archocentrus or Cyptoheros species.

From a behavioral standpoint, this fish behaves like most of the convicts I have kept, although it might be a bit less aggressive.

Amatitliana kanna "Boca del Toro" is found in the Boca del Toro region of Panama, but I do not have specifics about the collecting locality.

Amatitliana kanna "Boca del Toro" is certainly as easy to keep as Convict Cichlids. I recommend a minimum of a 20 gallon tank and a temperature of 70 to 80F. Mine did just fine in hard, Chicago water.

Amatitliana kanna "Boca del Toro" is likely an omnivorous species in the wild feeding on a variety of foods. I am not aware of stomach content analysis for this fish.

I obtained six Amatitliana kanna "Boca del Toro" via my son Sam who purchased them as F1 fry at a club meeting of the Pacific Coast Cichlid Association.

I raised them in a 15G tank for three months and later transferred them to my pond (Summer of 2009) for growout. Only two fish survived the pond over that period, but fortunately they were a pair.

I placed the pair in a 40G breeder which also housed several Ilyodon furcidens (a large Goodeid) and a couple of Inca Stone cichlids. The tank temperature was about 67F since the Goodeids prefer cool water. Although the pair were clearly compatible, no spawning activity ensued for the Kanna.

I added a heater and raised the tank temperature to 74F and began to feed to some frozen bloodworms. Shortly thereafter, the pair laid about 50 or so tank-pink eggs in a "Boester Bell", a small 6 inch tapered ceramic cave named after Chicago cichlid breeder Rick Boester.

The female vigorously defended the eggs and male stood guard nearby. The eggs hatched in about 72 hours and I saw wriggling fry in the ornament. I let the fry wriggle for two days then used a turkey baster to extract about half of them for growout. Unfortunately, the parents only loosely defended their clutch after this and the remaining fry disappeared.

Once free-swimming, the fry are immediately able to eat live baby brine shrimp. At about 2-3 weeks, I transitioned the fry to flake food and they grew quickly.