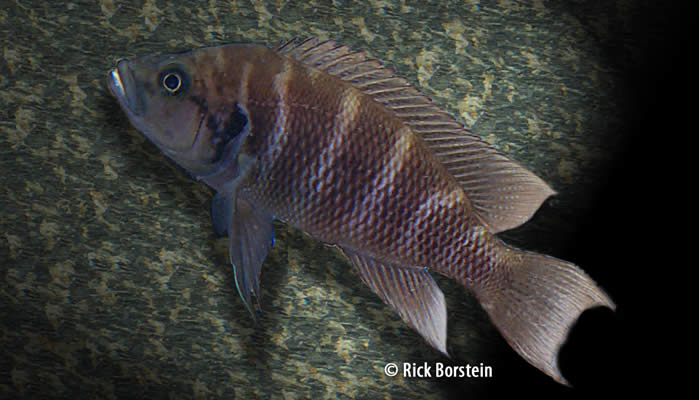 A common name for this fish is Striped Brichardi

It is difficult to distinguish the sexes of this fish. Males obtain a maximum size of about 3 inches and females are generally slightly smaller. I have read conflicting accounts on the internet regarding sexual behavior. Some accounts report that this fish is a harem polygamist, but a greater number of reports indicated that this fish pair bonds for some period of time at least. Since I only had a single pair to work with, I was only able to observe a single pair bond.

Neolamprologus savoryi is found at water depths were between 10 and 40 meters. Other members of the brichardi complex are generally found in shallow waters. This fish seldom strays from rocky cover. According to author Ad Konings, this fish is never found in large groups but only as pairs with the occasional individual specimen sited. Habitat water conditions are pH range 7.6 to 8.8, dGH range 10.0 to 18.0.

Neolamprologus savoryi requires neutral to hard water and should be kept at temperatures between 76 and 82 degrees F. This fish is best kept in a species tank if you seek to breed them. You can, however, keep them with other similarly sized nonaggressive fish if desired. Provide plenty of rocky cover with numerous hiding places. Be aware that this fish has a shy and retiring nature; it will spend the majority of time out of view.

Breeding Neolamprologus savoryi is more difficult in my experience than other members of the brichardi complex. One aspect of this fish that complicates the aquarist’s attempts to spawn this fish is that is so shy. It took me quite a bit of the time to discover when this fish spawned.

For best success, place a pair in a 20 gallon tank containing lots of rockwork. I used several pieces of slate and some broken flowerpots. The slates were positioned to provide numerous small caves with dark interiors. Neolamprologus savoryi does enjoy digging, so I used fine gravel in my breeding tank. Once the fish have settled in, start to condition the fish on high quality flake and frozen foods.

You will need to carefully watch the fish to know when a spawning has occurred. If you observe the smaller fish, probably the female, staying out of view for day or two, there’s a very good chance she is guarding eggs. Neolamprologus savoryi is a secretive cave spawner, and I was not able to observe them in that act. Eggs are laid either on the roof or near the top of roof walls in dark caves.

I have heard conflicting accounts about the number of eggs laid by this fish. I believe they have small broods between 10 and 20 eggs. The largest number of fry I obtained from a single spawn was five. The parents move the fry and keep them hidden for a week or more after they are free swimming.

My trick for raising secretive cave spawning lamprologines is to begin feeding the fry five days after I believe spawning took place . In my first attempts at raising Neolamprologus savoryi fry, I provided Cyclops-eeze, but was only able to raise one or two fry per spawning. When I provided newly hatched baby brine shrimp, I was able to raise four to six fry per spawning.

Neolamprologus savoryi fry are slow-growing like other members of the brichardi complex. It can take four to five months to get them up to one-half inch in size. One of the compelling reasons to breed members of the brichardi complex is the endearing tendency of juveniles to aid the parents raising successive generations of babies. This is great to watch and there's no problem keeping multiple generations in the same tank.

At retail, expect to pay $20 to $25 each for 2 inch long fish . Fry, if you can find them, are 2$ to $5 each for one half-inch long specimens. Neolamprologus savoryi can be difficult to find. It is quite unlikely that you will find it at your local pet store, although I feel that this fish is attractive enough to find a ready market. This fish has recently become more available in the hobby and I have seen it listed on various wholesale price lists. If if you have already bred Neolamprologus brichardi and desire a challenge, then Neolamprologus savoryi would be an excellent fish to try. Ask your local pet store to order some for you.