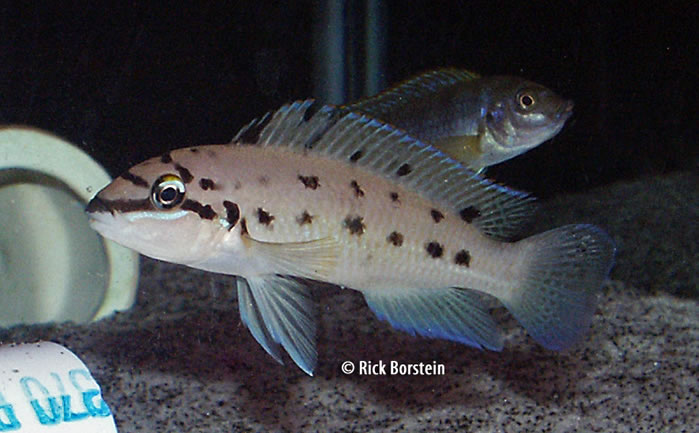 The face of Chalinochromis sp. "ndobhoi" sports three nicely defined bars and the body has three rows (one in the dorsal fin) of black dots. The underlying body color is tan to pink with nicely defined scale edges.

Chalinochromis sp. "ndobhoi" is always found associated with rocky habitats. Water conditions are pH of8.0–9.0 and temperatures of 75–81F.

Chalinochromis sp. "ndobhoi" presents no problems. I kept both juveniles and adults with various other mbuna and Tanganyikans with no problem.

The downward pointing mouth indicates that this fish grazes on the rocks for invertebrates (aufwuchs).

In my tank, they ate a variety of foods including HBH Graze, New Life Spectrum, and various other flakes and pellets.

I obtained several juvenile F1 Chalinochromis sp. "ndobhoi" from Jim D'Antona while on a trip to to San Jose. I'd never seen this fish before, and the attractive pattern of the adults and juveniles intrigued me. If memory serves, I bought five fish and they survived the trip back to Chicago nicely.

Over time, I lost two of the fish. At 2-1/2 inches, I was getting a bit concerned. All of the fish were the same size. I had also bred bred other species of Chalinochromis and Julies, and generally the males are quite a bit bigger. Thus, I surmised that I had either all males or all females.

Fortunately, fellow club member Sam Miller had bred this fish and was willing to part with a wild adult male. The specimen Sam gave me was much larger than my fish— approaching five inches— and had a hump. I added this new male in with my other fish which were then living in a 65-gallon tank with some mbuna.

I expected to see fireworks if I placed this large male with three juvenile males, but not much of anything happened. The fish ignored one another for the next three months. The younger fish grew about 1/2-inch to 3" long. About this time, I received a shipment of fish and had to make some space. I put the Chalinochromis sp. "ndobhoi" in the only space I had— my 125 gallon full of 20 Tropheus duboisi. I wasn't quite sure what would happen. Would the Tropheus go after the Chalinochromis? How would the Chalinochromis sp. "ndobhoi" do on the vegetable-heavy diet necessary for the Tropheus?

Fortunately, the Tropheus barely noticed the Chalinochromis sp. "ndobhoi" and diet of HBH Graze and Dainichi Veggie Deluxe pellets suited them just fine. I placed a 4" terracotta breeding cave in the tank and soon after I noticed the large male and a smaller female pair bonding. The pair stayed close to each other and drove away the other fish from their end of the tank. The normally active and aggressive Tropheus kept their distance.

One day I noticed that the pair had laid about fifty eggs on the inside wall of the terracotta cave. I observed both the male and the female guarding the eggs. Sometimes only the male could be seen outside the cave while the female ventured across the tank. I found this behavior unusual and it made me suspect that the bigger fish might be the female. Sam Miller assures me that this isn't the case and I can't find any other reference that would validate this presumption, so I mention it only in passing.

The eggs are tan-pink in color and hatch in about 4 days and wriggle for about 4–5 more days before free-swimming. I pulled the terracotta cave and placed it (without the parents) in a 10-gallon tank for hatch out. The fry were immediately able to eat baby brine shrimp. They are moderately fast growers for the first 60 days and then slow down. At five months old, they are about 1-1/4 to 1-1/2 inches and ready for sale.

$10 to $16 for juvenile fish. Wild fish are in the $16-24 range. Chalinochromis sp. "ndobhoi" is available on some wholesalers lists but it isn't a very common fish, except among hobbyists.