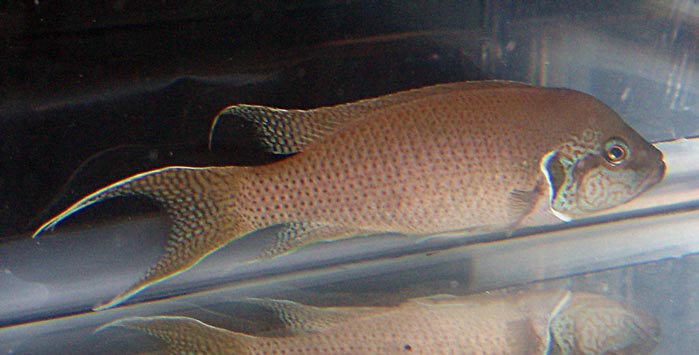 Neolamprologus brichardi was one of the earliest African Cichlids introduced to the hobby. It was first brought into the United States in 1971 by Pierre Brichard. It was collected off of Burundi and was originally called "The Princess of Burundi". It was one of a myriad of lyre-tailed fishes from Lake Tanganyika, N. pulcher, N. gracilis, N. falcicula and N. splendens, just to name a few. It takes a dedicated aquarist to be able to tell these fishes apart, although there are differences. They are small to medium sized cichlids with large males attaining a size of 5 inches. Females are somewhat smaller, about 3 inches.

Neolamprologus brichardi is found on both the east and west coasts of Lake Tanganyika. It lives in caves along the rocky substrate. Its’ coloration (basically shades of tan) allow this small cichlid to camouflage itself among the rocks and caves and thrive among much larger fish in the lake.

Neolamprologus brichardi require no special care. They, of course, love hard alkaline water with a temperature range of 70-82 degrees. Optimum temperature is in the 76-78 degree range. They do well in community tanks and are usually non-aggressive. It is imperative that they have caves to make themselves comfortable.

I feed these fish the same as everything else in my fish room with the exception of earthworms. I haven’t found a food that they won’t eat. Anything from frozen brine shrimp to bloodworms to pellets and assorted flake foods. I do make sure that they get a little more green matter, in the form of Spirulina, than some of my other fish.

Neolamprologus brichardi is for the most part, monogamous, meaning that they pair off for life. They are cave spawners and will produce around 100 fry per spawn. They will tend to their young for months and will, in fact, take care of several successive spawns at the same time. A word of caution, if the tank starts getting overcrowded, they will eat their young to make room for the next spawn.

Neolamprologus brichardi is still a very popular fish and should be available anywhere that African Cichlids are sold. Some other aforementioned species are not as common and a little searching might be needed to find them.