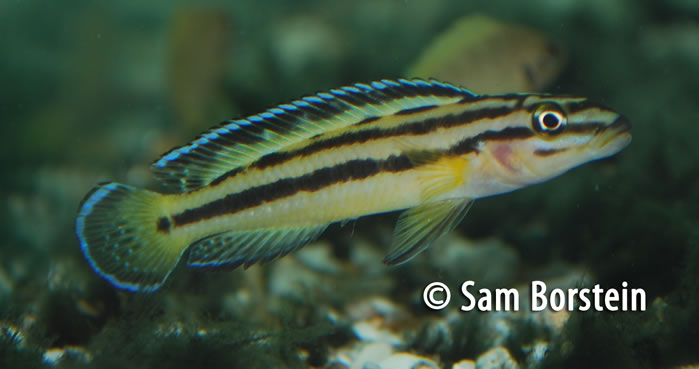 Julidochromis sp. “regani kipili” is an undescribed substrate-spawning Tanganyikan cichlid similar to Julidochromis regani. This elongated cichlid has some nice dark horizontal stripes over a tan/cream to orange background. There is a notable triangular-shaped marking on the cheek. The dorsal and caudal fins are edged in electric blue.

Julidochromis regani gets rather large for a Julie, up to five inches or so. Most folks believe the females get bigger than the males.

According to Ad Konings, yellow varieties of Julidochromis regani are found in shallow areas sand and rocks. The darker varieties of the fish with a cream base were observed in deeper rockier areas. Thus, the fish has adapted color patterns for the best chance of survival.

The Kipili Regani is popular because it displays a lot of yellow-orange color. Unfortunately, the "kipili" variety of Julidochromis regani can be confused with Julidochromis ornatus. Always keep location varieties and individual species of Julies separate as they will often hybridize.

I have heard that scientists are considering breaking apart the Julidochromis regani complex into separate species. It wouldn't surprise me given the different appearance and habitats where this fish is found.

In Lake Tanganyika, Julidochromis regani "kipili" is found in rocky areas around 5M in depth.

Julidochromis regani is a relatively easy fish in my experience. I kept 3-4 young adults under 3-inches in a 10-gallon tank with fry. My water is pH 7.4, 300 ppm hardness. Water of neutral pH and medium to high hardness will suffice. I did regular partial water changes of 50% weekly.

In the wild, Julidochromis regani feeds upon algae and invertebrates picked from rocks and sand. In the aquarium, they take a variety of prepared foods. I fed Tetra Cichlid Flakes, HBH Graze, New Life Spectrum and baby brine shrimp.

I started with four juvenile Julidochromis sp. regani kipili" and grew them up to find out I had one female and three males. This is a pair-bonding cichlid, at least in my experience, that survived moving to three different tanks.

Julidochromis sp. regani kipili" is a secretive cave spawner. You'll need to watch the fishes behavior. If you see a large specimen (likely the female) and a small specimen (likely the male) hanging out with each other near a spawning site and occasionally driving away other fish in the tank, you probably have pair. My largest fish consistently hung out near the spawning site (usually a large barnacle or shell, I wasn't sure).

Still, it's very likely you won't know when or if they spawned. The trick with these fish is to always feed live baby brine shrimp. The adults enjoy eating it and any tiny fry which will remain hidden in the spawning "cave" will eat it, too.

The babies stay in the breeding "cave" until they get kicked out by the parents who are ready to spawn again. At "graduation time" they will usually be 1/4" to 3/8" long. I've occasionally newly hatched babies and they are very tiny.

I have read reports indicating that Julidochromis sp. regani kipili" has spawns up to 150 eggs, but the most babies I saw from my pair were about 35-40.

The babies are not especially fast growers. Getting them up to 1-inch in size takes about five months.

Julidochromis regani is occasionally available at pet stores. Expect to pay about $12-15 for juveniles.

Julidochromis regani isis occasionally available at GCCA auctions and swap meets. If you're looking for them, place a free Wanted ad on GCCA's Cichlid Classified system.