The genus Opthalmotilapia is one the genuses (the others are Cyathopharynx and Cunningtoniaand sometimes Aulonocranus) which are commonly referred to as featherfins for their elongated pelvic fins. The pelvic fins act as egg dummies during the mating ceremony.

Opthalmotilapia ventralisis widely distributed in Lake Tanganyika and there is a considerable variation in markings and color between fish collected from various locations. Ad Koning's book Tanganyikan Cichlids in their Natural Habitat includes color photos of twenty-one different locations! Some males, particularly the southern variants are bright blue in coloration. Others are black, or nearly so, and the remainder have various blotches. Note that in the aquarium, the appearance of the fish will vary depending on the mood. When you catch these fish spawning, though, be prepared to be dazzled.

The "Longola" variant of Opthalmotilapia ventralis is readily available in the cichlid hobby at the present time. Longola males have an overall silvery blue base color with a nearly black swath across the chest of the fish. Coloration can be difficult to describe, but the fish is iridescent and can flash blue, gold or yellow depending on the light. Because of the yellow flash this location is sometimes referred to as Opthalmotilapia ventralis "Longola Sunflower". Females are drab by comparison. Males get up to about seven inches or so while females might get to an inch or two smaller.

Opthalmotilapia ventralis "Longola" is found in the shallow, surge habitat of Lake Tanganyika, a rocky area that is generally less than three meters in depth.

Opthalmotilapia ventralis "Longola" is probably not the best fish for a beginning cichlid keeper, but they are not difficult per se. This fish requires excellent quality water, so large, partial water changes are critical. Tanganyikans do best at consistent temperatures, too, so make sure you have a reliable heater. Finally, you will need a big tank to help avoid aggression.

Opthalmotilapia ventralis "Longola"is an herbivorous fish, but in the aquarium they accept a wide variety of flake and pellet foods. Make sure that your food includes some vegetable and fiber content. I fed Dainichi Veggie Deluxe, NLS Spectrum and Extreme Cichlid pellets with the occasional treat of Repashy Spawn and Grow gel food.

I obtained a group of five adult fish from fellow GCCA member Jason Libasci. I placed the group into a six foot, 125-gallon aquarium with a sand substrate. This tank was filtered by a large wet/dry filter and maintained at 78F.

Companions for my fish were a group of six, Sarotherodon carolinae and three Etroplus suratensis. These wildly different species pretty much ignored each other. Despite the fact that the Opthalmotilapia ventraliswere quite a bit smaller, they seemed to be the most aggressive fish in the tank. Unfortunately, I lost two of the individuals for unknown reasons, but the remaining trio settled in quite nicely.

Although I witnessed courting behavior, I never saw a female holding. I made two changes in what would ultimately be a successful attempt to spawn this fish. First, I created a pile of stones and some plastic plants on one end of tank and added small stack of quarry tiles adjacent to it. Secondly, I began feeding Repashy Spawn and Grow (a gel food) which is great at conditioning fish. After a week of feeding Repashy food every other day, I did a large partial water change and the fish spawned immediately after.

Female Opthalmotilapia ventralisare not very reliable holders. If you see a female holding, do not feed the tank for a couple of days to get her accustomed to carrying the eggs. Afterwards, only feed the tank crushed flake food. The females will continue to eat while holding and will brood successfully while doing so provided you do not feed anything large like a pellet food.

Brood sizes are small, but the eggs are very large, among the largest of any mouthbrooding cichlid species. In the spawns I observed, there were between nine and twelve eggs. I stripped the females at two weeks at which point they still had a very large egg sack. I moved the fry to 1-gallon holding tank with a sponge filter and about 10 days later most of the egg sack was gone. At this point, I began feeding a small amount of baby brine shrimp.

Curiously, the fry are not only large, they grow at an astonishing pace. At six weeks, it is not unusual to have fry which are 1.25 inches long! This is one of the few cichlid babies that will eat flake food at only 3 or 4 days old.

Opthalmotilapia ventralis "Longola" is not a fish you are likely to find at a pet shop unless the specialize in cichlids or have connections with local breeders. However, you can usually find  1.5 inch fish for $15 to $20 each on the internet. One source is Dave's Rare Fish. 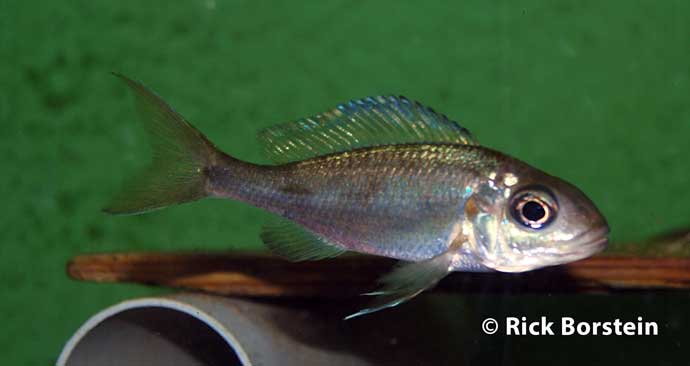