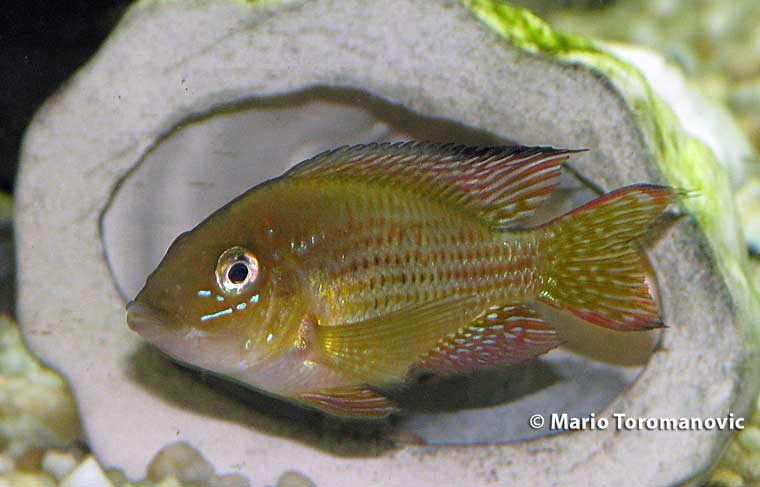 Gymnogeophagus are part of a group popularly known as eartheathers. The common name is easy to deduce from its Greek roots:
- gymnos = naked
- gea = the earth
- phaegein, to eat

Gymnogeophagus sp. Meridionalis is a riverine species most often found in clear water over a sandy bottom.

Gymnogeophagus sp. Meridionalis is not too picky about water conditions. In nature they are found in soft to medium-hard water, temperature between 76-80°F and pH between 6.5 and 8.0. They only grow up to 4” so they don’t need a huge tank. These fish are not very aggressive except when they have fry.

An important requirement when keeping any kind of eartheater is to provide a sand or fine gravel substrate. As the group name suggests, they like to dig through the substrate in their search for food. In my tank I kept them at 78°F, pH 7.2 and performed a 30% water change every 3 to 4 days.

Gymnogeophagus sp. Meridionalis are omnivorous. In the nature they feed on insects and crustaceans, but in my tank they did just fine on a diet of flake and pellet food, frozen Mysis and brine shrimp, with the occasional treat of live black worms.

Some internet sources suggest that in order to breed these fish, you need to keep them at cooler temperatures (around 60°F ) for a three to four month resting period.  I kept my group from the juvenile size at a temperature of 78°F. At the approximate age of 8 to 9 months, a pair formed and spawned soon after. They attached a clutch of eggs to the side of flower pot. Forty-eight hours later, the eggs turned to wigglers and on the eight day post-spawning, the fry were free swimming. I introduced the babies to newly hatched baby brine shrimps at this point. Both parents care for the eggs and fry. Interestingly, right before spawning, both male and female lose their colors and turn into a grey fish with black belly.

You will occasionally find this fish in pet stores. Expect to pay about $8 for juvenile fish.Gymnogeophagus sp. Meridionalis is not difficult to find. It is on numerous wholesalers’ lists, so ask your local pet shop to order some for you.