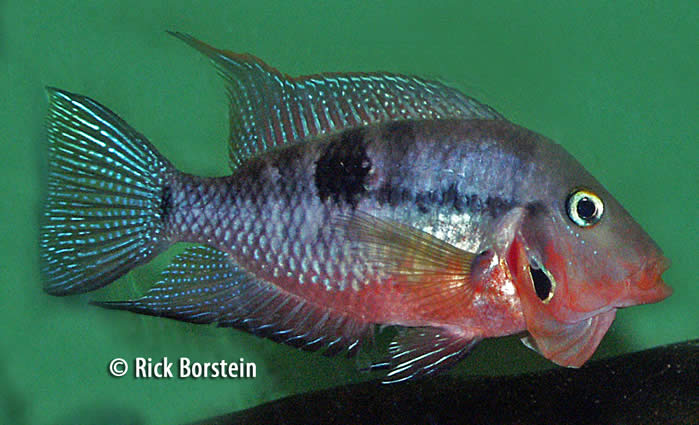 Thorichthys meeki is a fish with several aliases. For years it was known as Cichlasoma meeki, then changed to Archocentrus meeki. Luckily, though the Latin name has changed, it’s common name the Firemouth Cichlid hasn’t. It is named that because of the intense red/orange color of its gill plates. It has been a long time favorite of cichlid lovers everywhere. The average sizes are males at about 5 inches and females around 4 inches, although I have seen males as large as 7 inches.

Thorichthys meeki is a native of Mexico, specifically the Yucatan Peninsula. They are found in the slow moving waters of several local rivers.

Thorichthys meeki are relatively easy to keep. They are not fussy about water conditions (neutral to hard is fine) and moderate water temperature (about 76 degrees Fahrenheit). They are hardy and will thrive under less than perfect conditions. They can take larger fluctuations of ph and they can water temperatures. Water below 70 degrees is asking for trouble. They are typical cichlids in the fact that no plant is safe near them. They are extreme diggers, especially when it’s spawning time. A 20 long is a nice tank for a pair of Thorichthys meeki. Use plenty of rocks and caves or even flowerpots. A relatively flat piece of rock for the top of a cave can almost guarantee they will spawn there.

Firemouths are good eaters. In other words, they eat anything. They love everything put in front of them. They will devour frozen brine shrimp, red worms, white worms and most commercially available flake foods. Of course, a balanced varied diet is best. The fry are immediately able to eat baby brine, cyclop-eeze or golden pearls.

Thorichthys meeki aren’t necessarily easy or hard to breed. They are, however, tricky to sex. The lazy man’s way is put 6 or 8 in a tank and let them pair off. If you have specimens that are in excellent condition, the males have much longer filaments on their dorsal and anal fins than the females. If they are chewed up or for whatever reason gone, the plumpness of a ripe female is not too difficult to spot. Beware the dorsal fins of the females can be pointed so that tried and true method doesn’t always work with Thorichthys meeki. Once paired, they breed quite prolifically and take parenting to the extreme. Cichlids became popular in the hobby because of their behavior and parenting skills. If you have never seen a cichlid play parent, this is the fish for you. Just don’t stick your fingers in the tank. Females will lay anywhere from 100 to 500 eggs at a time. Fry will start wiggling in 2 days and become free swimming in about a week. Both the male and female will protect the nest from other fish.

Fry up to $10 U.S. Adults $10 to $20. Small T. meeki is a common sight at most aquarium stores. Larger ones are usually available. If possible, seek out a known location variety from a reputable hobbyist.