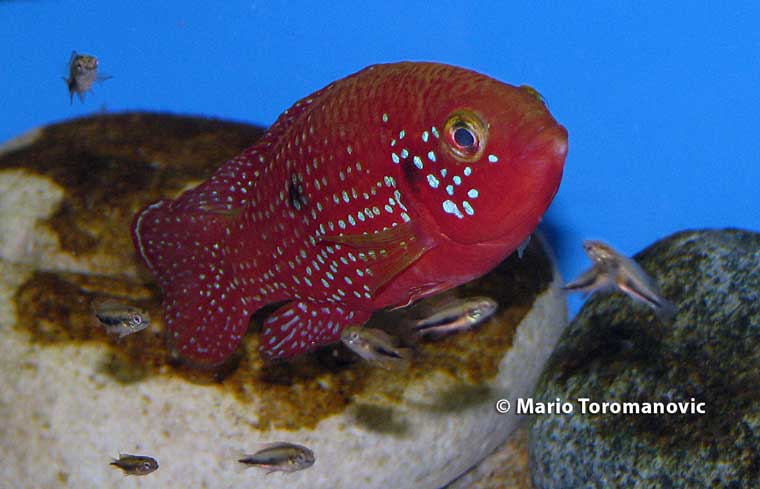 Hemichromis guttatus is also known as the African Jewelfish, Jewel Cichlid or Jewelfish, and is the most common Jewel in the hobby.  This fish gets its common name from the beautiful red colours on its body and fins. They grow up to 6 inches, but generally females stay a bit smaller, around 5 inches. The fish was described by Günther in 1862.

Note that many Jewelfish are misidentified and the genus is being reviewed by Dr. Anton Lamboj. The fish above was identifed by Dr. Lamboj at the 2012 ACA Convention. The irridescent blue spots are one of the indicators that this fish is Hemichromis guttatus.

Hemichromis guttatus is found in many West African streams and rivers.

Hemichromis guttatus does not present many difficulties. In nature they are found in wide range of water parameters, with pH between 6.5 and 7.5 and temperature between 75º and 82º, but my pair did just fine in neutral water at of  80F and pH 7.6. These fish are notoriously aggressive (definitely not a community fish tank material) and should be kept only with members of the same species.

Hemichromis guttatus are omnivorous. In the nature they feed on insects and crustaceans. In my tank they did just fine on the diet of flake and pellet food, frozen Mysis and brine shrimp, with an occasional treat of live black worms.

My first encounter with Jewelfish was a long time ago when I saw a beautiful red pair in my local fish store, caring for bunch of babies in a community 55 gallon tank.  I wanted to buy them right then and there, but unfortunately I didn’t have any tank space at the time. Finally, a few months ago, I was able to get a proven pair from fellow club member Steve Lewandowski.

It took them few days to acclimate to their new 20 gallon tall home, and to get comfortable.  A few weeks later, after heavy feeding and regular water changes ( 50% every 3-4 days ) I noticed the female turn a deep red color . . . I guess to let male knows that she is ready. The feamle then started  cleaning and hanging out inside large cave. The next day, sure enough, I noticed a bunch of eggs inside that same cave. Both male and female were guarding the eggs. Two days later, the eggs turn into wigglers and six days later I had around 300 free swimming fry. Right away I introduced them to their first food, live baby brine shrimp.

Jewelfish are very common and readily available at retail and is usually inexpensive. Two-inch juveniles are usually less than ten dollars.