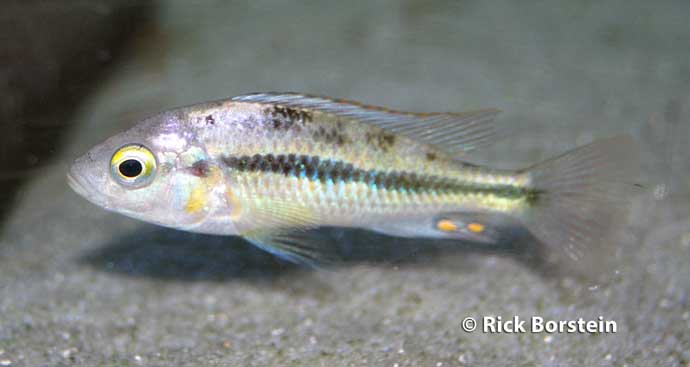 Yssichromis sp. "Blue tipped" is a mouthbrooding cichlid from Lake Victoria, Africa which was found near Rusinga Island. This fish, which does not yet have a species name, was originally discovered by Yves Fermon in 1992. In the hobby, it is often referred to as "blue tips" or just "blue tip".

Yssichromis sp. "Blue tipped" is a rather slender bodied fish. A large male might get up to four inches and females are about a half inch smaller. The coloration is highly variable, especially on the males when spawning. When the boys are feeling very "sexed up", they turn a steely blue and the caudal fin is edged in red-orange.

However, the color is fleeting in my experience and I wasn't able to obtain a picture of a colored up male. Here is a link to very nice picture of a colored male available from Dave's Rare Fish. For the most part, this is a silvery-tan fish with some green and darker blotches on the side. Males which are quiescent will sometimes show a blue swath along the back.

Females are a bit drab, mostly silver-tan, and have a few gold highlights. Depending on the light, both males and females will show some metallic glints.

Yssichromis sp. "Blue tipped"  is usually found in the open water. Reports are that it schools with an open water cyprinid (Rastrineobola argentea) to help protect it from predators.

Yssichromis sp. "Blue tipped" is easy to keep. All it needs is clean, hard water that is 75-80F and a two foot or longer tank.

I obtained a eight, tiny Yssichromis sp. "Blue tipped" fry from fellow GCCA Member Matt Swarzek. At the time, the tiny fry were baredly three-eights of an inch long. The fry went into a 5-gallon tank with a sand bottom. Initial growth was slow, but once the fry got up to about half an inch, growth accelerated. When the fry were a bit over an inch, I moved them to a 40 breeder and later to a 75 gallon tank. The 75 gallon tank had a sand substrate and was filtered by two large Swiss Tropicals sponge filters. At this point, the fish were just under three inches long and occasionally I saw flashes of the blue coloration as a male danced in front of female.

Shortly thereafter, I observed the first female holding. I allowed her to hold for twelve days and then stripped her of fourteen small fry. The babies are immediately able to eat baby brine shrimp and a week later I transitioned them to flake food.

You are not going to find Yssichromis sp. "Blue tipped" at your local pet store. You can sometimes find it on the internet or from hobbyists who maintain rare Victorian species.  I suspect that unsexed juveniles would go for $8 per fish.

Report May 2015 by Rick Borstein