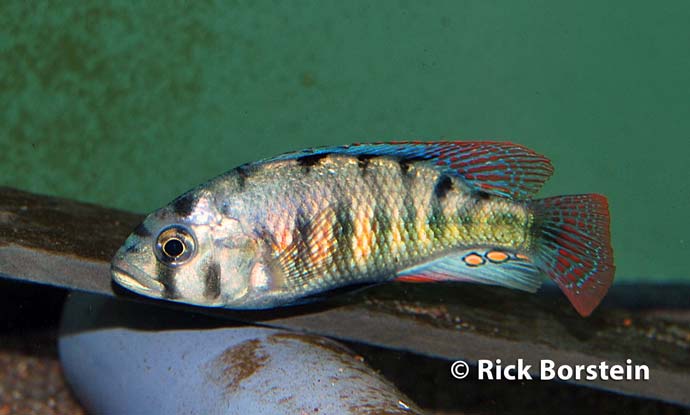 Haplochromis sp. "Entebbe" is an mouthbrooding cichlid from the Lake Victoria which collected near the city of Entebbe, Uganda.

Like many Victorian fish, it does not have an official scientific name. To me, this fish looks a lot like Neochromis nigricans, especially when young, but other folks on the net think the mouth may be atypical for Neochromis.

Regardless, this is a nice looking fish. Males have nice barring over a tan-gold base coat. The dorsal and caudal are nicely edged in red. The caudal also has prominent egg spots. Females are non-descript.

Haplochromis sp. "Entebbe" is somewhat aggressive cichlid, but should not present issues for cichlid keepers who can devote a four foot or larger tank. Provide adequate cover such as rocks and caves and try to break up vertical sight lines in the tank. My group did great in ordinary Chicago water (pH 7.4) at 78F.

I have not seen stomach content analysis for Haplochromis sp. "Entebbe" but I would guess that it is omnivorous. At any rate, my fish readily ate Flake food, Repashy Spawn and Grow, New Life Spectrum and Xtreme pellets.

I obtained my group of adult Haplochromis sp. "Entebbe" from another GCCA member. The fish were a bit over two inches when placed them in a 75G tank. This tank had a sand substrate and lots of PVC and rockwork. Filtration was provided by a Penquin 330 filter and a 5-inch Poret Foam filter.

Initially, I had trouble conditioning the females who were chased aggressively by the dominant male. Fortunately,  Repashy Spawn and Grow (a high protein gel food) helped. All the fish greedily ate this food until they looked like sausages! Initially I was worried that I bloated the fish. Fortunately, the females bulked up and rounded out nicely and soon two of the females were holding in a week or two. I allowed the female to hold for 14 days after which I stripped her of 42 fry! I offered live baby brine shrimp as a first food and the babies grew quickly.

Haplochromis sp. "Entebbe"has is occasionally available on cichlid-focused specialty sites. Two inch juveniles go for about $8 to $12 each.