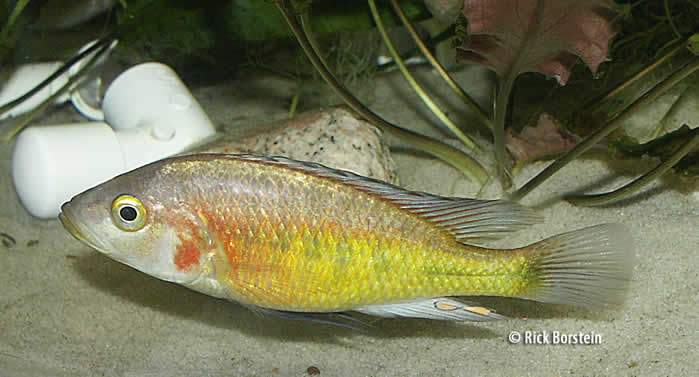 Males achieve sizes of up to 7 inches. Males, in breeding condition, are quite spectacular. A rich, red coloration appears on the upper flanks and a nice golden hue appears on the lower half of the fish. The pelvic fins may also appear completely black.

Females stay smaller, growing to about 4-1/2 to 5-1/2 inches. Unspectacular in appearance, they are tan-gold in color, and have suffused pattern of bars and several dots. A darker dot usually appears near the gill plate.

Lipochromis parvidens is found closely associated with the shores of Lake Victoria over muddy areas .

Since this fish grows large, provide a large tank of at least four feet in length.

Conditions in Lake Victoria range from a pH of 7.2 to 8.4. Regardless, Lipochromis parvidens does just fine in our 7.4 pH, hard Chicago water at about 78F.

Lipochromis parvidens is a predator. Stomach content analysis has included baby fish and eggs of a variety of species.

We believe— but have no reliable source to confirm this— that it is a "bump" predator. It may be that this fish attacks mouthbrooding females in an effort to dislodge fry, a behavior that has been noted in several species of Malawian fish. We noticed that several fish housed with Lipochromis parvidens were damaged, most often injuries to the eye.

I obtained eight, 1.5 to 2-inch juveniles at the Ohio Cichlid Association's Extravaganza held in November, 2004. I hadn't heard of this fish, but had previously bred Lipochromis sp. "Matumbi Hunter" and had enjoyed it. I was warned that the fish was quite aggressive and that it was an off-shore specimen (the latter isn't true).

The eight Lipochromis parvidens made it safely back to Chicago and I placed them in a 90-gallon tank with some Neolamprologus mustax, Enatiopus melnogenys, and Geophagus crassilabrus. The tank had a sand substrate and was filtered by a TidePool wet/dry filter. At the time, they were the smallest fish in the tank, so I didn't worry too much about them. Indeed, for a while, they got along fine with the rest of the fish.

When the Lipochromis parvidens exceeded four inches length and approached sexual maturity, I experienced mysterious losses in the tank. First, two Geophagus crassilabrus were killed. Then, an Enantiopus, blinded in one eye by an attack, succumbed. I removed all the other fish but the Neolamprologus mustax to another tank.

Side note: Neolamprologus mustax is a very tough fish. Although much smaller than the Lipochromis parvidens, it can dish it out.

The Lipochromis parvidens continued to grow and a dominant male became evident. This truly is a spectacular fish, certainly one of the more impressive Victorians! The dominant male began to vigorously court the females and chase the sub-dominant males. Curiously, I didn't experience any damage within the group of Lipochromis as you might expect with Pseudotropheus species.

Within a week, I found a female holding. I let the female hold for 13 days and stripped her of 24, large nearly free-swimming fry. After two more days in a hanging breeder basket, I removed the fry to a ten-gallon grow-out tank. The free are immediately able to take baby brine shrimp and doubled in size the first week.

$10 to $15. This fish is generally available for much less at cichlid auctions and swap meets.

Lipochromis parvidens is not the kind of fish you would expect to find at your local pet store. It is available on several wholesalers list, so an internet search will be required if you want to find them. I've seen the sporadically available over the last several years.